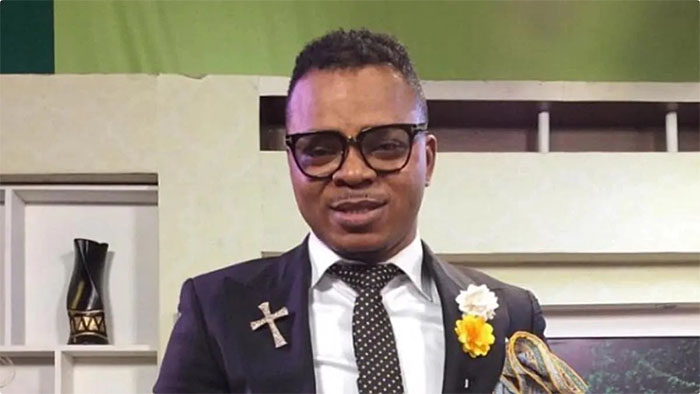 Controversial pastor Daniel Obinim, the founder of the International God’s Way Church (IGWC), will today appear at the Kaneshie Magistrate Court in Accra.

He has been charged with publication of false news, as well as forgery of a document contrary to Sections 208 and 159 of the Criminal and other Offences Act, 1960 (Act 29).

He was in police custody for about three nights after he was arrested and charged and has since been able to extricate the bail bond.

Last Thursday, as part of the bail conditions set by the Kaneshie Magistrate Court, Obinim, who claims to be an angel of God and has been frequenting heaven, reported to the Police Headquarters

He spent a couple of hours with the police CID before leaving the premises after 1 p.m.

Obinim was granted bail by the Kaneshie Magistrate Court in Accra last week in the sum of GH¢100,000 with three sureties, one to be justified but was not able to extricate the bail bond on time and had to remain in cells until Friday, May 22, when he finally walked home.

According to the MP for Assin Central, Kennedy Ohene Agyapong, who has launched a crusade to expose fake pastors and claims Obinim is one of them, Obinim has since been cooling off in Akosombo since he left police cells.

Although the police have not released the identity of the complainant, DAILY GUIDE understands that it was through the effort of the firebrand MP Kennedy Agyapong, which led to Obinim’s arrest.

Kennedy Agyapong has confirmed that he personally reported the pastor to the Inspector General of Police for offences including fraud, money laundering and misuse of the police logo to harass some of the boys he has been having criminal deals with.

As if that is not enough, the MP has been having running battles with the maverick pastor and has reported him (Obinim) to the Economic and Organised Crime Office (EOCO) for the anti-graft body to investigate him over alleged money-laundering and other related crimes.

Already, the Ghana Revenue Authority (GRA) is chasing him to pay about GH¢1.6 million in taxes to the state.

On May 13, 2020, an Accra High Court presided by Justice Doreen G. Boakye-Agyei dismissed Obinim’s application that was challenging the GRA’s decision to ask him to settle a tax liability of GH¢1,591,797.50.

According to the court, the GRA followed due process in determining and notifying Obinim about his tax liabilities and that Obinim had not followed laid-down procedures to make his objections to be given a hearing as required by law.

“He cannot use his failure as a ground to seek judicial review. This instant case is not a proper and appropriate case for the court to exercise its powers of judicial review,” Justice Boakye-Agyei stated.

Sources close to Obinim are saying that he intends to instruct his lawyers to challenge the decision because as far as he is concerned he paid his taxes to the state.

Obinim is no stranger to criminal prosecution, as he has had brushes with the law on at least two occasions.

In the first case, he vandalized a private radio station – Hot FM – but was acquitted and discharged in October 2015 after the complainants had allegedly lost interest in the case.

In September 2018, Obinim and two of his pastors were sentenced to a total fine of GH¢12,000 by an Accra Circuit Court after they had been accused of assaulting two teenagers on the premises of IGWC.