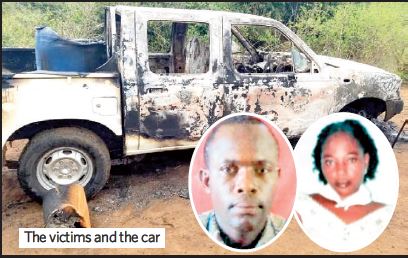 The victims and the car

RESIDENTS OF Tsopoli in the Ningo-Prampram District of the Greater Accra Region are in a state of shock following the gruesome killing of three persons believed to be members of the same family by unknown assailants.

The victims have been identified as Joshua Kwao Kranteng Oman, together with a woman only identified as Gladys Sophia Delali Tetteh, who is believed to be his wife, and their five-year-old son named Ackuaku Oman.

Preliminary police checks are showing that they were shot and their bodies set on fire which burnt beyond recognition in their Nissan pickup with registration number GW 8970 V on Thursday night.

They were said to be returning home at Zutsukpo, an isolated community at Tsopoli, when they met their untimely deaths.

When DAILY GUIDE visited the crime scene, their bodies as well as the pickup had been burnt beyond recognition.

Confirming the incident, Assistant Commissioner of Police (ACP) Dodzie Hlodzi, Prampram Divisional Police Commander, said the family were returning from Tsopoli where they went to fetch water when the incident occurred few metres to their residence which is on the outskirts of Tsopoli.

“The assailants laid ambush and accosted them on the way when they were returning that night with the barrel of water behind the vehicle,” the officer said.

“A man, his wife and a son were murdered and their bodies set ablaze in a pickup. When we visited the place, we realised that there were three different pieces of ammunition there at the scene which means they were actually shot. We need to get the homicide unit and others to see if there will be any lead,” ACP Hlodzi stated.

Another source told DAILY GUIDE that it appeared one of the victims was shot outside the vehicle and dragged back to the place where the fire was set and there were traces to that effect.

Witnesses told police that the burnt car was found a few metres away from the victim’s house with the charred bodies in it.

Police retrieved three spent ammunition and beads believed to belong to the woman at the crime scene.

Kweku Oman, brother of the deceased, later described the incident as “a dreadful loss” and called on the police to bring the perpetrators behind the heinous crime to book.

“I was at Ashaiman around 7:30 pm when I was called to rush home for an emergency meeting; it was there that I was told Kwao, his wife and son had been killed.”

Meanwhile, police at the Prampram Division are appealing to residents to provide credible information to help arrest the perpetrators.