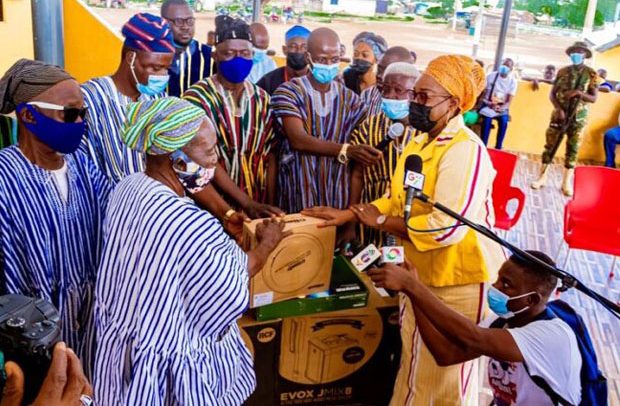 Minister of Information Kojo Oppong Nkrumah has donated a Public Address (PA) system to the Gbewaa Palace in Yendi in the Northern Region.

The donation was in fulfilment of a promise the minister made to the Overlord of the Dagbon Traditional Area Ya Na Abukari Mahama II, during a working tour of Northern Ghana earlier this year.

The Director of Finance and Administration at the Ministry Of Information, Patricia Dovi-Sampson who presented the PA system on behalf of the Minister, said the minister was redeeming his pledge to overlord.

The Ya-Na, receiving the donation, said the chiefs and people of Dagbon were grateful to Mr. Oppong Nkrumah for the kind gesture.

He mentioned that the Minister is part of his kingdom and should continue to carry himself with diligence at all times.

“This system will help the Palace disseminate information to the public and assist the Ya-Na is his engagements with the people of Dagbon,” he added.

Wakayna Out With ‘Problem Dey’