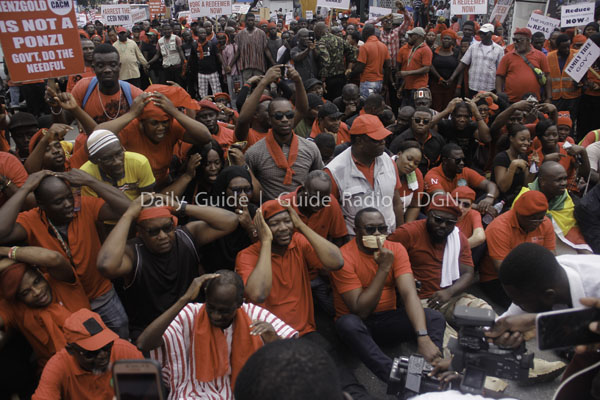 Ghana, of course, is in better hands than it was under the previous administration. Lying is the stock-in-trade of members of the National Democratic Congress (NDC) and they do so with a touch of expertise.

Yesterday the party embarked upon a demonstration against what we would say is ‘the closure to the public office thievery which characterized their tenure at the helm.’

They are already tired of being in opposition and the fatigue has driven them to the streets two and half years after leaving the glitters of the presidency.

They had their say through the demonstration because, after all, good governance and strict adherence to the Constitution is the order in the country under the leadership of President Akufo-Addo.  There were neither broken bones nor casualties by the time they ended their street theatricals which included bear floor sitting by the party leadership.

During their tenure, such political activities could easily turn bloody as it did when a New Patriotic Party (NPP) sympathizer lost an eye in a demonstration during the NDC tenure.

Embattled National Chairman of the NDC Samuel Ofosu-Ampofo made gestures to indicate a gagged society. Ghanaians are not gagged. That gesture is shy of the truth.

Ahuto FM, owned by the party chairman, continues to run political hate programmes, yet nobody has taken them off air.

The licences of radio stations that failed to meet the standards of the regulatory authority were withdrawn and, therefore, to create a contrary impression is to peddle lies and engage in cheap politics.

Ofosu-Ampofo knows very well that he is in court because of his dirty plans for election 2020 strategies which, thankfully, are in the public domain.

Which responsible government voted into power by the people to run the country would fold their arms and allow activities with the tendencies to compromise the peace of the country go on without applying the relevant laws.

It can only be imagined where the country would be if the NDC were still at the helm; the economy was on the precipice at the time of the elections which completely ousted ex-President John Mahama from power. The economy was mismanaged by a crop of Ghanaians who had no clue as to what they were inflicting on the country.

The rule of law prevails and the economy is now in good hands under the Akufo-Addo government. The results of its good stewardship are posting positive results two and half years into its tenure.

When the former Governor of the Central Bank of Nigeria was here, he did not mince words about his positive impression about the progress the country is making under its present managers.

That a country was virtually run down under the NDC has within two and half years managed to turn things around is a palpable development which no amount of propaganda and lies can reverse.

Throwing dust into the eyes of Ghanaians is no longer the best option and should be discarded by the NDC as a vote-grabbing strategy. It has outlived its usefulness because Ghanaians are no longer afflicted by amnesia.

We cannot entrust the reins of the country into the hands of reckless managers who don’t know how to raise the country to better heights.

The railway corporation, long gone moribund, is on the verge of being resuscitated and the National Health Insurance Scheme on wobbling feet under the NDC is now operating at full throttle. The                dividends from the flagship projects introduced by the President and his team when they start visiting the country would jolt the country to further heights.

The President won’t lie to his compatriots, he has promised.

I Won’t Lie To You! Nana Assures

Increase In Drug Abuse By The Youth Very Worrisome