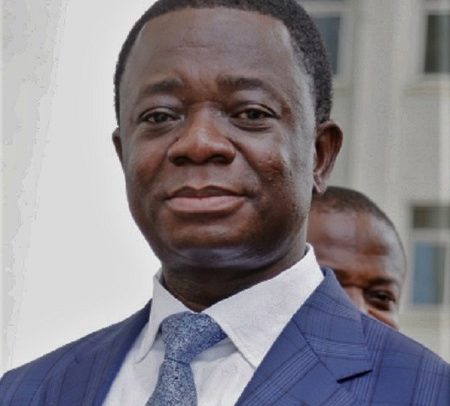 AN ACCRA High Court has once again dismissed an attempt by the embattled former Chief Executive Officer of Ghana Cocoa Board, Dr. Stephen Opuni, to temporarily halt his trial pending the determination of an interlocutory appeal.

The court, presided over by Justice Clemence Honyenuga, a Supreme Court judge sitting as an additional High Court judge, yesterday dismissed an application for stay of proceedings filed by Dr. Opuni pending the determination of an appeal he filed against the court’s order on him, to call his fifth witness.

Dr. Opuni, together with businessman, Seidu Agongo, are on trial for allegedly causing over GH₵217 million financial loss to the state in the supply and purchase of Lithovit liquid fertiliser.

The court, in its ruling, held that the application did not raise any exceptional circumstances to warrant a stay of proceedings in a case that has been ongoing for four years.

Dr. Opuni had called his third witness who was being cross-examined via video link due to medical reasons which could not permit the witness to be physically present in the courtroom.

The facility being used for the video telecast of the proceedings had already been booked by other users and the only date available for the trial is June 24, 2022.

Justice Honyenuga, therefore, ordered Dr. Opuni to call his fourth witness in order to effectively manage the trial, while the third witness can be cross-examined on June 24.

His lawyer then filed an application for stay of proceedings before the court in protest of the order on him to call his fifth witness when the fourth witness was yet to be discharged.

Moving the motion, Samuel Codjoe, argued that Article 19(3) of the Constitution requires the presence of an accused person before a trial can go ahead unless the accused person refuses to make himself available or misconducts himself during the trial.

The second ground, he said, is premised on Article 19 Clause (2g), arguing that the court erred when it ordered Dr. Opuni to call his next witness out of turn since the prosecution did not have this condition imposed on it when it was conducting its case.

“We also state that this being a criminal trial, our right to a fair trial will be breached if we are ordered to call our witnesses out of turn, in that it is important that a witness completes his evidence before another is called. And it is very possible that based on the evidence of a witness in the box, we might not need to call a further witness,” he added.

The application was opposed by Stella Ohene Appiah, a Principal State Attorney, who argued that the Supreme Court has held that the mere filing of an interlocutory appeal is not a special circumstance and therefore, will not occasion the grant of a stay of proceedings.

She said the court ordering Dr. Opuni to call his fifth witness while the fourth was yet to conclude his evidence is well within the jurisdiction of the court per Section 69 of the Evidence Act.

“The interlocutory appeal on which this application for stay is premised is doomed to fail. Again, the applicant has not demonstrated to this court in anyway how this court’s order to him, to call his witness out of turn, constitutes an exceptional ground for which this court should favourably look upon his application,” she added.

Justice Honyenuga, in his ruling, held that this is a four-year-old case and cannot be unduly adjourned as the accused persons are entitled to be tried within a reasonable time as envisaged by the constitution.

He said the court ordering for witnesses to be called in turns is within its remit to control the proceedings.

“Looking at the grounds of appeal, I do not think that it has any chance of success. No exceptional circumstances have been urged to warrant this court to exercise its discretion in favour of the applicant which will further delay the four-year-old case. In the circumstances, the applications is dismissed,” the court held.

The case is adjourned to June 24.