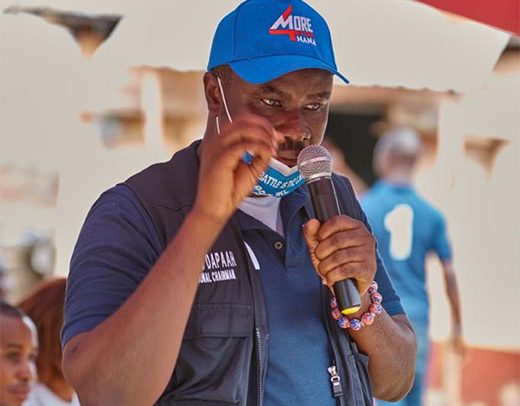 The Regional Chairman of the New Patriotic Party (NPP) in the Oti Region, Evans Dapaah has intimated that but, for the NPP, the region will have been abandoned and left less developed than it is today.

He explained that the records both documented and on the ground prove that whenever the NPP was in power the Oti enclave sees a lot of development and progress. However, the moment the NDC takes over, every good project comes to a standstill, because NDC does not value the Oti enclave like the NPP does.

He said even before Oti was carved out of the old Volta region, the Oti enclave (Volta North then) always suffered at the hands of the NDC because projects that were earmarked for the area were moved to the central and southern part; the current Volta region. It is for this reason that the development gap between Volta and Oti is wide although they used to be one region.

He observed in an interview with DGN online while reacting to claims by the 2020 flag bearer of the NDC, John Dramani Mahama during his ‘Thank You’ tour in Oti.

According to Mr. Mahama, the NDC’s track record in the Oti region was unparalleled and for that, he was pleased the people voted massively to ensure that all eight parliamentary seats in the region were retained by the NDC.

He mentioned that after his party lost power in 2016 and subsequently in 2020, major projects in the region have stalled because the NPP government does not have the interest of the Oti region at heart.

Reacting to the claims, the Oti NPP Chairman, Evans Dapaah noted that “It is clear that Mahama and his entire team are not on the ground. I think they have lost touch with reality or they are just being untruthful.”

He quizzed that “so if they cannot hear about the projects ongoing in the region under Nana Akufo-Addo and the NPP can’t they see? When they were coming to Oti region and they left Hohoe, the last town in the Volta Region, couldn’t they see the progress of work on the Eastern Corridor from Hohoe to Jasikan to Kadjabi to Nkwanta?”

Mr. Dapaah stressed that it is absurd for anyone to compare the record of the NDC’s eight years under late President Atta-Mills and Mahama on one hand and the five-year reign of Nana Akufo-Addo and Bawumia.

He recounted that during the party’s regional (Oti) annual delegates’ conference he reminded the people of the region that but for the NPP government, the Oti region will just be a dream. The creation of the new region has led to many developments that hitherto will have not come to the area. Some of which include, Regional Capital, Regional Hospital Project, Regional Coordinating Council Building, Dambai Town Roads, Krachi Town Roads, Extension of electricity, Free Senior High School, Eastern Corridor Road Asphalting, Factories among others.

Politically the party now has its regional executives and had more resources than previous years to campaign. Although the party was not able to secure a seat in the region, the votes for the party increased to over 35% of votes cast in the 2020 elections. For the first time, about four NPP parliamentary candidates closed the huge vote gap between them and the NDC candidates.

A clear indication that the Oti region is appreciative of the good works of the NPP and with consistent and adequate support the party’s votes could jump to 40% with at least two parliamentary seats, he noted.

He used the opportunity to also commend Madam Frema Opare, Chief of staff, Office of the President, Ursula Owusu Ekunful, Minister for Communication and Innovation, Herbert Krapah – Deputy Minister for Trade and Industry, and Martin Ayisi Esq., CEO of the Minerals Commission and Chief Patron of Oti NPP for their immense roles and contributions towards the building of the party in the region.

He further stressed that “Redeeming the Oti region from the NDC is a mission possible,” however requires collaboration, dedication, commitment, hard work, and sacrifice from all and sundry.