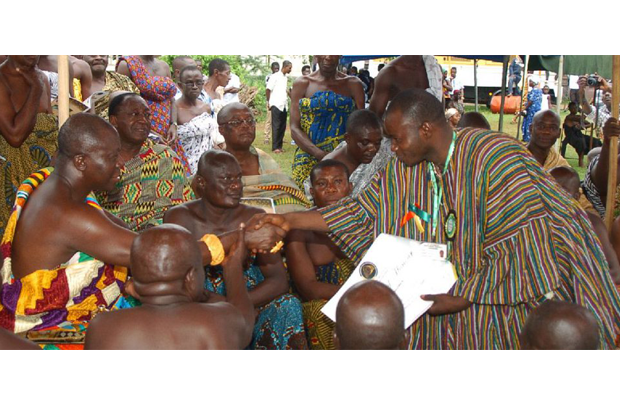 One of the teachers being congratulated by Otumfuo Osei Tutu II

The Asantehene, Otumfuo Osei Tutu II, on Friday honoured 130 teachers drawn from very deprived areas across the country during a colourful ceremony.

This was during the sixth edition of the Otumfuo Teacher Awards ceremony, which was held at the Manhyia Palace in Kumasi.

The Otumfuo Teacher Awards scheme is intended to motivate teachers to accept postings into rural and deprived communities in the country.

The 130 teachers took home juicy items such as brand new laptops, computers, teaching aids and others to help them to deliver on their mandate.

Otumfuo Osei Tutu II, in his address, said teachers play key roles in the training and the upbringing of children, so they need to be well-motivated.

“I am aware of large numbers of teachers in all parts of the country whose selfless services continue to impact positively on the quality of education in Ghana.The teachers selected for today’s awards thus represent a fraction of such dedicated and patriotic citizens of the land. All such other teachers are considered best teachers,” he said.

Otumfuo also said the awards scheme is his personal commitment of ensuring that no part of the country is left out in terms of development, adding that the awards ceremony would be sustained.

“The awards constitute my token of acknowledgement and appreciation of the indispensable role of gallant teachers, who over the years have braved all odds to accept to teach in deprived areas.

In the coming years, the focus of support will be towards building a sound and solid foundation for higher education through the improvement of our basic education,” he disclosed.

All the awardees, drawn from all the 16 regions, were given the rare opportunity of shaking hands with the Asantehene, who was sitting in state.

The awards ceremony was held under the auspices of the Otumfuo Charity Foundation, which is being managed by Lady Julia Osei Tutu, the wife of the Asantehene, and other prominent people.

This year’s awards ceremony formed part of a series of activities marking Otumfuo Osei Tutu’s 20 years reign on the Golden Stool as the 16th Asantehene.

My Encounter With A Reckless Okada Rider!