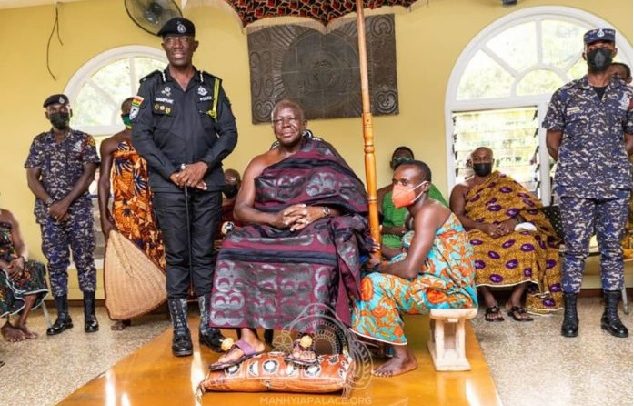 The IGP with Otumfuo

THE ASANTEHENE, Otumfuo Osei Tutu II, has expressed concern over increasing number of unlicensed guns in the hands of private people.

According to him, the proliferation of small arms poses danger to the security and peace being enjoyed in the country, so the security services, notably the police, should act quickly.

“The number of unlicensed guns in possession of civilians in the country nowadays is alarming and very dangerous, therefore it should be a major concern for everybody,” he said.

The Asantehene made the call when the IGP, Dr. George Akuffo Dampare, led a team of top police officers to pay a courtesy call on Otumfuo at the Manhyia Palace in Kumasi.

The Wednesday’s visit served as a curtain raiser for the IGPs three-day working tour of the Ashanti Region, where he met and interacted with police personnel.

The Asante King was of the view that the proliferation of unlicensed guns in the country was largely the cause of series of armed robberies in some parts of the country.

He has, therefore, charged the IGP and the entire Ghana Police Service to investigate and find the sources or the suppliers of the guns and stop it without delay.

Otumfuo particularly tasked the IGP and heads of the other security agencies to work hard and tighten the borders of the country to stop people from illegally importing guns.

He said the tireless efforts of the police and their sister security agencies to reduce crime, would not work if civilians were allowed to get hold of unlicensed guns.

Otumfuo also charged the IGP to implement policies that would expose the bad nuts in the Police Service, saying “most of your men are good but we have bad ones in there.”

According to the Asantehene, the task ahead of the IGP is enormous, therefore the entire Police Service should rally behind him to succeed in the interest of the country.

Otumfuo also assured the IGP of his total support and that of Asanteman in order for him (IGP) to carry out his duties of maintaining law and order in the country successfully.

The IGP, Dr. Dampare, on his part, stated that his vision is to work and instill discipline and professionalism in the service in order to boost the image of the Ghana Police Service.

He, wholeheartedly, thanked the Asantehene for his usual wise counsel and firm assurance to support him (IGP) to improve security and accelerate national transformation.