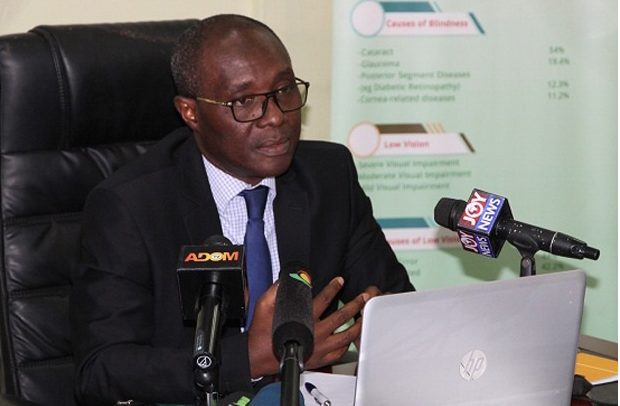 The Ghana Health Service (Ghana) has revealed that a total of 227,920 people are blind in the country.
This is according to a new survey conducted by the Service this year. It further disclosed that some 329,560 Ghanaians have severe visual impairment while 579,040 have moderate impairment.
According to the statistics, 54.8 per cent of the blindness was caused by Cataract, 19.4 per cent, due to Glaucoma, 12.3 per cent by post segment diseases like diabetes and 11.2 per cent from Cornea-related diseases.
Speaking at the press launch of the World Sight Day 2021 in Accra, which falls on October 14 on the theme “Love Your Eyes” Head of Eye Care Unit of GHS, Dr James Addy explained that some of the causes of blindness were avoidable, and called on Ghanaians to undergo regular eye screening to detect eye problems at their early stages.
He said global statistics revealed that 1.1 billion people globally were living with vision loss.
“That includes 91million children – our future – who live with vision loss. 90 million children around the world have vision loss as they don’t have access to eye care services. 165 children need glasses,” Dr Addy added.
He observed that the use of glasses could reduce the odds of children failing in class by 44 per cent, and urged parents whose children are not performing in class to conduct eye test for their kids.
Dr Addy noted that children with vision loss were 2.5 times likely to be in formal education, adding that “women are 12 per cent more likely to have vision loss than men.”
That he said was due to hormonal changes, how they were frequently exposed to trauma and the use of cosmetics like eye lashes, and how they live longer than men.
Touching on the steps taken by the GHS to curb the issue, Dr Addy said his outfit in 2018 launched the National Cataract outreach programme in Koforidua, and the “Ghana beyond cataract blindness” campaign.
He said free cataract surgeries were conducted for residents in some regions, including Eastern, Western, Volta and Upper West under the programme.
Deputy Director-General, GHS Dr Anthony Ofosu Adofo, stated that much effort should be geared towards prevention of vision loss.
He reiterated the need for Ghanaians to adopt healthy lifestyles by cutting down smoking, maintaining normal blood sugar and pressure, and cholesterol level, while wearing sunglasses and other lenses when exposed to screens and the sun.
World Sight Day is an international day of awareness creation held annually on the second Thursday of October, to focus attention on global eye health.