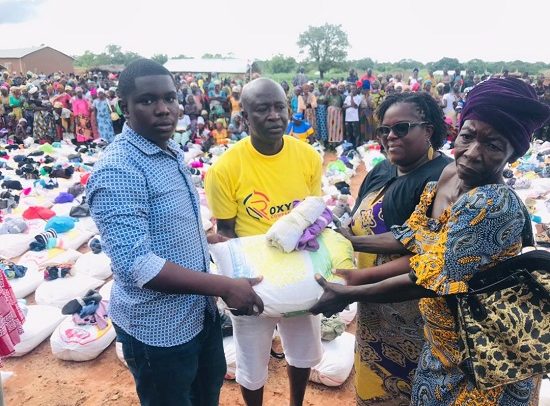 The Chief Executive Officer of the Yennutoona foundation, Konlan Namleeb, has supported vulnerable women in the Bunkpurugu-Nakpanduri district the North East region.

The beneficiaries include physically challenged, visually impaired, widows, aged women, orphans, and victims of conflict-affected communities in the district.

Beneficiaries were supported with 600 bags of maize, clothes and other foodstuffs.

Yennutoona foundation also provided fertilizers, cashew seedlings and financial support to help them establish and expand existing businesses to cater for their families.

It is estimated that over 20,000 households will benefit from the support.

The vulnerable people in the district are struggling to feed their families because their businesses and farming activities have been affected due to the Covid-19 pandemic.

During the lent season, most parts of rural communities are hit with a shortage of food coupled with the effect of conflict.

About 70 houses were burnt down completely in the conflict resulting in the killing of the Sayeegi Chief and his son.

In 2016, fresh clashes erupted in the then Bunkpurugu-Yunyoo District in the Northern Region between the Jamon and Jafouk clans over the legitimate occupant of the skin in the area, forcing residents to flee from the town with their families.

Lives and properties were lost as a result of the clashes between the feuding factions which brought severe suffering and poverty in the district.

The two families later performed a blood burial to institute peace and unity among both families.

Addressing the beneficiaries, the Chief Executive Officer of the Yennutoona foundation, Konlan Namleeb, said the conflict in the area affect most families severely reason why they decided to support them yearly to ensure that they pick up the pieces.

“In this Covid-19 period things are extremely difficult for people most especially the vulnerable in society and as you can see there are people who sleep hungry a day or two and do not have anyone to cater for them in this area and so this support we are presenting to them will help sustain them for some time until they harvest what they have been able to plant with our support.”

According to him, most people have been affected by the Covid-19 pandemic especially in rural communities adding that businesses are down and that it’s difficult to farm in larger quantities because the economy is not favourable to them.

He urged the people in the Bunkpurugu-Nakpanduri district to sustain the current peace in the area and live in peace and harmony for the development of the entire district.

“ This area is a conflict area and as you can see we have all the tribes and religions here we are trying to bring all of them together to ensure that they live in harmony to prevent any future conflict in this area.”

Mr Namleeb appealed to sons and daughters of the District district to extend a helping hand to the vulnerable people in the district especially the affected persons in the conflict areas to enable them to live a better life after the conflict.

One of the beneficiaries, Mambora Banimbia told DGN Online that the support is a relief and has come at the right time adding that their family of seven has exhausted the remaining food in the house.

“My husband is sick and cannot work on the farm and my eldest son also has a broken hand so I am the only one who can farm and here is the case it’s not time for harvesting so we do not have any food in the house so the support will go a long way to assist me to feed the children.”

She disclosed that sometimes they farm but after harvesting the proceeds they get can not even cater for the family before the next family season.

“ The soil is mostly not fertile and we do not have money to buy fertilizer to apply on our farm reason why we do not get enough proceeds.”

The Paramount chief of Nakpanduri, Naba David Kansas, who was the special guest called on the people to embrace peace ensure that there’s no more conflict in the area.

He thanked the CEO of the Yennutoona Foundation for his continuous support to vulnerable people in the district and called on others to emulate his kind gesture.