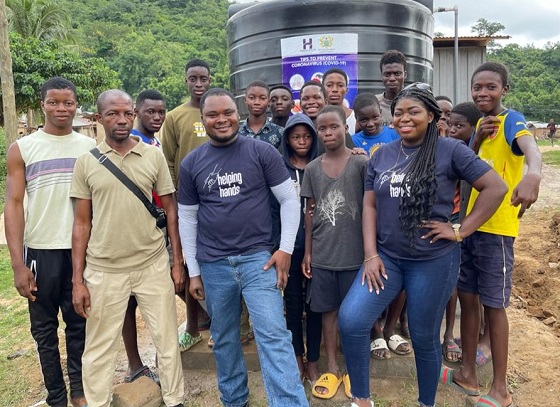 Diarrheal diseases are a major problem in Ghana, accounting for a large number of infant deaths. The problem has been attributed to unhygienic practices and contaminated drinking water. As a a result, the Harriet Afriyie Foundation and Honourable THOMAS NYARKO AMPEM, Member of Parliament for the Asuogyaman Constituency in May cut a sod for the drilling of a borehole and construction of a public toilet for the Abume community.

The Harriet Afriyie Foundation, Helping Hands over the week did a mini Commissioning of the water project for the Abume community.

Abume is a fishing community in Akosombo under the Asuogyaman Constituency in the Eastern Region of Ghana.

The community do not have portable drinking water and decent place of convenience which has its challenging health effects to the community dwellers. The Harriet Afriyie Foundation and The Member of Parliament for the area in the month of May sod cutting for the construction of a borehole and a public place of convenience, promised to expedite action in the execution of the two projects, which was estimated to cost in excess of over 100,000ghc.
Because water is Life, that water project was expeditiously executed and commissioned over the weekend and the public toilet is at an advanced stage and will be commissioned soon to give relief to the fisher folk community of Abume.

The community members expressed delight in the commissioning of the water project which will now guarantee them safe drinking water.

The CEO of the Harriet Afriyie Foundation, Madam Harriet Afriyie urged the community members to inculcate the culture of maintenance to enable them continue to enjoy the facility which has come in handy to solve their perennial water problems.