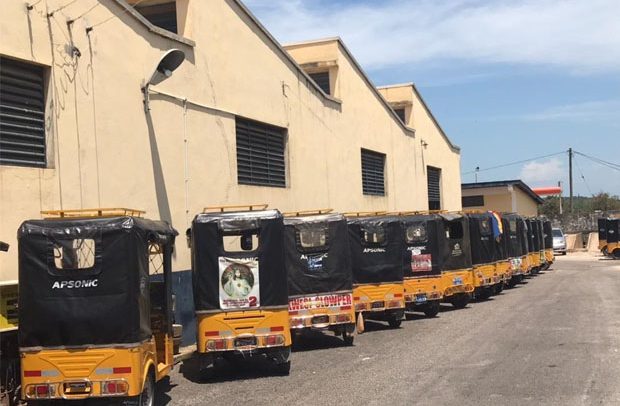 Sixty tricycle riders, illegally operating in the Cape Coast Metropolis, were on Monday, arrested by the Central Regional Police Command during a special operation to clamp down on illegal acts.

The Operation was targeted at the tricycle riders many of whom are boys of school going age, as well as others operating without license or insurance certificates.

Regional Public Relations Officer (PRO), DSP Irene Serwaah Oppong, briefing the media, expressed concern about the rate at which people were being killed and maimed by tricycles in the Metropolis.

She explained that punishment for riders who operated against the law were either to pay a fine of 25 penalty units or serve a jail term of 30 days, depending on which one the court decides.

She said those arrested would be arraigned before court on Tuesday.

DSP Oppong said the law does not permit tricycles to be used for commercial purposes in the country and any person who goes contrary to it must face the consequences.

She disclosed that, 12 out of 25 riders arrested last month, were being prosecuted at the law courts.

DSP Oppong revealed that most accident cases recorded in the Metropolis within the first quarter of this year was caused by reckless and careless driving of these riders, and there was the need to expedite action to curtail further losses and damages.

She appealed to the public to desist from engaging tricycles for commercial purposes because it was harming a lot of lives and properties in the Metropolis.

“We are appealing to the public to stop patronizing tricycles since its usage was not safe for humans “.

DSP Oppong called on traditional and opinion leaders and all relevant stakeholders within the Metropolis to help stop the illegal usage of tricycles.

She commended Nana Conduah VI, Omanhen of Edina Traditional Area for his decisiveness in banning commercial tricycles in his area and called on other leaders to reciprocate this action to support the Police.

She further pledged the unflinching support of the Police in maintaining peace as well as law and order in the region.

The joint operation, was embarked on by officers from the counter terrorism unit, operations unit and others from the SWAT.