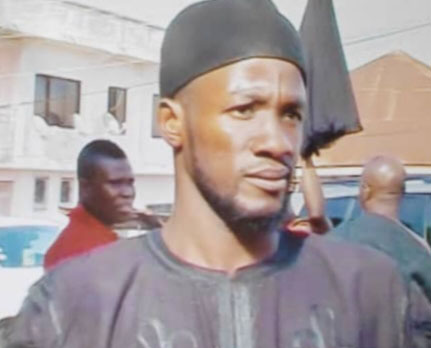 THE ASHANTI Regional Police Command has declared one Saddat Mohammed, 38, aka Alhaji, wanted over the murder of the Asamponhene, Oheneba Kwadwo Aforduor.

Investigations made by the police so far indicate that Alhaji, who was a close friend of the late traditional leader, might have a hand in the chief’s murder.

According to the police, the Asamponhene was said to have visited Alhaji in his house at Odeneho Kwadaso on Sunday morning. Later, the two friends travelled together on that same day.

Some hours later, the body of the chief was found in his black Land Cruiser vehicle at Ebuom on the main Ejura- Nkoranza highway in the Ashanti Region.

ACP David Agyeman Agyem, the Deputy Ashanti Regional Police Commander, said the chief was murdered and attempts by the police to locate Alhaji to assist in their investigations had proved futile.

“The police have, therefore, secured an arrest warrant from

court; so we have declared Saddat Mohammed, aka Alhaji, wanted,” the police chieftain told journalists in Kumasi.

Addressing a press conference yesterday, he sternly cautioned anybody that is harbouring Alhaji in his house to alert the police to arrest him immediately.

“It is a crime in our laws to harbour a criminal and so I urge the public, especially those who may be harbouring him, to desist from that in their own interest,” he warned.

He also said three people, including a close confidant of the deceased chief, were being questioned by the police, adding that progress had been made in the investigations so far.

Meanwhile, checks made by DAILY GUIDE indicated that the police were indeed convinced that Alhaji masterminded the murder of the late chief, who was stabbed several times to death.

Reports suggested that a group of police investigators stormed the house of Alhaji at Odeneho Kwadaso on Sunday evening a few hours after the chief’s body was found.

It was gathered that Alhaji, who is married to a prominent queen mother in one of the communities in Kumasi, had vanished with his wife in a taxi, even though they own a fleet of cars.

After several attempts to locate Alhaji had proved futile, the police stormed the house again and towed away Alhaji’s white Land Cruiser vehicle to the Police Headquarters in Kumasi.

Few hours later, the Asamponhene’s body was found motionless in his vehicle at Ebuom on the Ejura-Nkoranza highway.