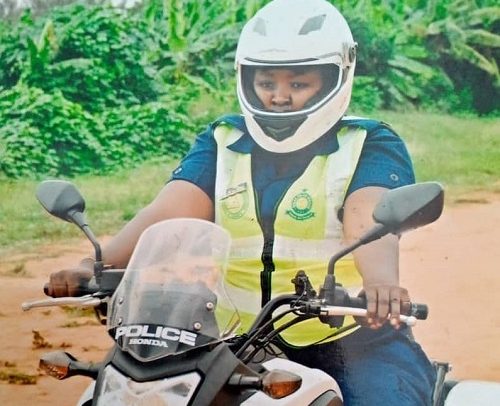 THE ASHANTI Regional Police are investigating what caused the death of Pw/L/cpl. Adiza Imoro, who was formerly stationed at the Kumasi Central MTTD.

The body of the police woman was found in front of Golden Temple, a popular drinking spot at Asawase, a densely-populated area in Kumasi.

One Paul Atambiri, a khebab seller at the drinking spot, spotted the motionless body on Tuesday around 1:20am and he quickly informed the Asawase Police.

The body has since been deposited at the Komfo Anokye Teaching Hospital (KATH) morgue in Kumasi for autopsy to determine the exact cause of her demise.

A police report said some officers, who initially had no idea that the deceased was a police woman, rushed to the crime scene after the khebab seller had reported the case.

“Police proceeded to the scene and found a body of a female adult aged about 34, lying dead in a supine position,” the police report which DAILY GUIDE has seen said, adding that “she was dressed in a white straight dress over a pair of black trousers and a pair of yellow slippers.”

The body, the report said, was carefully inspected but no mark of violence was seen to suggest any foul play, adding that investigations into the death is ongoing.

“The crime scene management team was invited to the scene for further investigations after which the body identified as Pw/L/cpl. Adiza Imoro, formerly stationed at Kumasi Central MTTD, was sent to the morgue,” the report indicated.

No arrest had been made yet and the report indicated that the khebab seller, who was the first to see the body, is assisting police in their investigations.