PPA To Descend Upon Bad Players 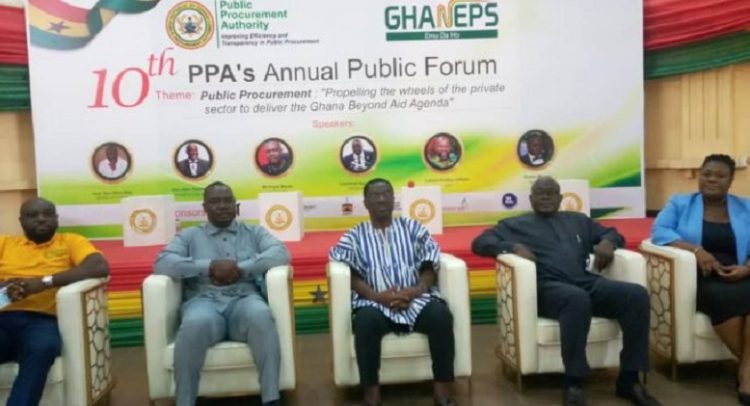 Dignitaries at the forum

The Acting Chief Executive Officer (CEO) of the Public Procurement Authority (PPA), Frank Mante, has expressed concern about non-adherence with the Authority’s directives, and warned that his outfit in collaboration with the Economic and Organised Crime Office (EOCO), the Auditor-General and the Special Prosecutor would descend upon sector players who did not conform to regulations contained in the Public Procurement Act, 2003 (Act 663).

He served this notice when he addressed the 10th annual public forum organised by the PPA last Thursday in Accra.

Themed: “Public Procurement: Propelling the Wheels of the Private Sector to Deliver the Ghana Beyond Aid Agenda”, the forum sought to solicit the views of key stakeholders and industry players towards repositioning the Authority to deliver on its mandate of ensuring a transparent public procurement system in Ghana among others.

Frank Mante bemoaned the lack of adequate funds as a major challenge to the Authority’s quest to improve efficiency and transparency in Ghana’s public procurement system.

According to him, the situation also hindered the Authority’s ability to effectively contribute to national development as well as government’s agenda of a ‘Ghana Beyond Aid’.

“As part of our functions, the PPA is mandated to periodically assess the conduct of public procurement activities in Ghana. Due to lack of funds, the Authority could not undertake this assignment for three years (2016-19),” he disclosed.

With the needed funding and logistics, the Authority, Mr. Mante noted, would put in place a procurement system that would ensure effective public spending which would impact development in the private sector.

“A government’s most direct impact on the private sector is through its procurement behaviour considering the fact that the government is often the largest investor in and purchaser of services, especially in poorer nations.

“The way it [the government] manages its commercial relations with the business community has profound influence on whether acceptable business practices will evolve or not, and on the dynamism of the private sector which is the engine of growth of the economy,” he remarked.

Chairman of the Governing Board of PPA, Professor Ameyaw Akumfi, also intimated that with the Authority being subverted organisation, it faced a challenge of limited funding, a situation he said “doesn’t make it possible for them [PPA] to do all the things that they want to do.”

“The current budget cycle is almost over and we are beginning anew so we hope that in the course of the year we will be able to sit down to see what request we can send to Parliament to enable them to work efficiently,” he said.

On the issue of non-compliance, he called for reforms in regulations to extend the suspension period from one year to at least four years, noting that it would make the companies competitive and offer quality services.