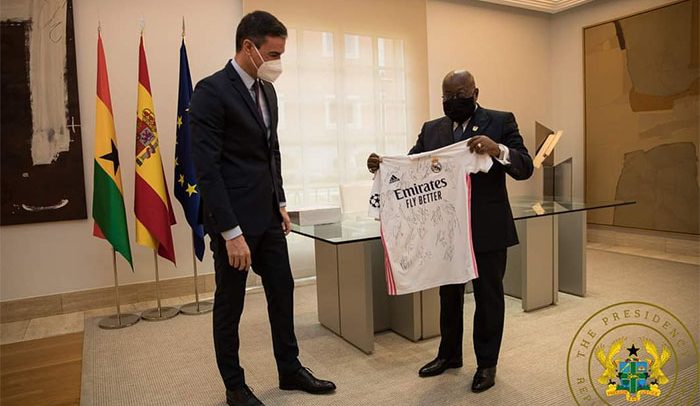 President Akufo-Addo who is on a three-day official visit to Spain is celebrating his 77th birthday today March 29, with avalanche of goodwill messages. 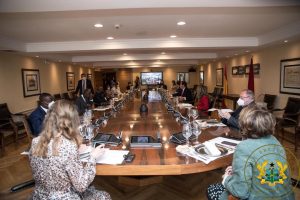 The jersey was autographed by several players of Real Madrid, Spanish La Liga giants which President Akufo-Addo is a fan.
The jersey has 77 boldly embossed, depicting the new age of the president. 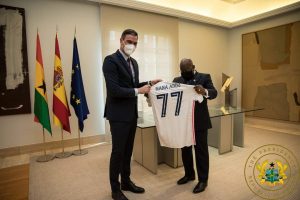 President Akufo-Addo is in Spain for the “Focus Africa 2023” Conference, being held in Madrid, Spain.

Amongst others, he held bilateral discussions with Spanish Prime Minister, Pedro Sánchez, delivered an address at the Focus Africa 2023 Conference, and held a meeting with Spanish investors who are desirous of investing in Ghana. 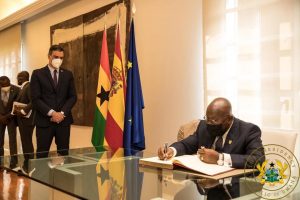 Focus Africa 2023 Conference defines Spanish foreign action in Africa until 2023, and forms part of the Spanish Foreign Action Strategy 2021-2024. It includes the specific actions the Spanish Government intends to take with key stakeholders in Africa, including Ghana, and it is aligned with the realisation of the 2030 Agenda for Sustainable Development and the African Union’s 2063 Agenda.