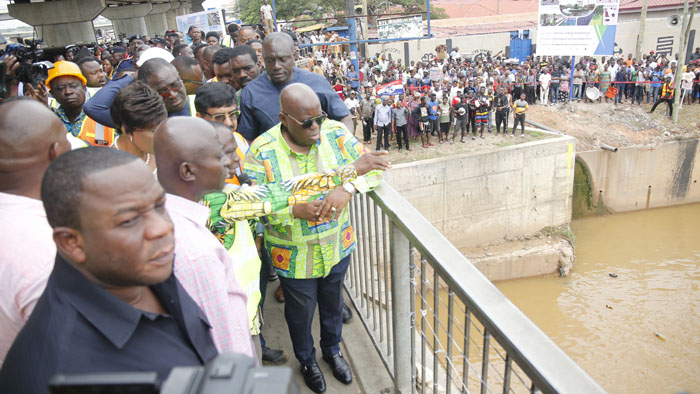 The President, Nana Addo Dankwa Akufo-Addo, yesterday inspected dredging in the Odaw River to ensure the free flow of rainwater now that the rainy season has dawned and instances of flooding experienced in parts of Accra.

He was satisfied with the quality of work being done by Dredge Masters, which has been contracted to undertake the assignment.

The Managing Director of the company, Captain Khan, explained the nature of the dredging exercise to the President, which is intended to transform both the Odaw River and the Korle Lagoon to modern water bodies for tourist and business activities in the long-term.

At the time of his arrival, the President saw workers busily dredging the plastic and debris-choked water body, which serves as a major channel for rainwater from most parts of Accra and beyond.

When it is choked with filth as it is now, the free flow of rainwater is hindered, resulting in floods in most parts of the city.

Dredge Masters started work after the June 3 Circle disaster, which claimed many lives.

The company was awarded the contract for a two-year period under the previous Mahama administration to dredge the Odaw drainage and modernize the Korle Lagoon under the Accra Sanitary Sewer Storm Drainage Alleviation Project.

The scope of the work includes a redesign and construction of the Klerp interceptor and breakwater.

The channel under review starts from the Odaw Onyasia confluence at Carprice in Accra, through Avenor, Kwame Nkrumah Interchange, Agbogbloshie, South Kaneshie drain and the Upper and Lower Lagoon areas notorious for flooding.

Operations Manager of Dredge Masters, Engineer Sena Adiepena, said since the renewal of the contract, over 1 million cubic metres of dredged materials had been removed from the channel and lagoon.

Encroachers and squatters disrupted the dredging activities until the police and the Accra Metropolitan Assembly (AMA) were called in to eject them.

Prior to the commencement of dredging operations, Engineer Adiepena revealed that encroachers and squatters along the drains had to be removed with the assistance of AMA and the Ghana Police Service.

He commended the two bodies for their support.

Adiepena said Dredge Masters Limited was working day and night to restore the drainage efficiency and holding capacity of the channel and lagoon to avert any flooding during this year’s rainy season.

George Asiedu told him that they were constructing a 630-metre storm drain to check severe flooding in areas like Obetsebi Lamptey Circle, Kaneshie Market and the Kaneshie First Light.

Ex-SSNIT Boss, 4 Others’ Case Back On