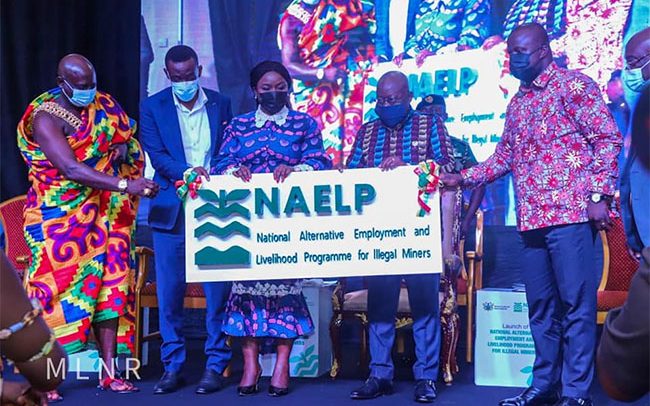 President Akufo-Addo yesterday launched an initiative that would help provide alternative sources of livelihood for illegal miners who have been stopped from engaging in wanton destruction of water bodies and the entire environment.

Dubbed ‘National Alternative Employment and Livelihood Programme (NAELP) for Illegal Miners’, the initiative has been designed to create thousands of jobs to alleviate the hardships of those affected by the government’s efforts to sanitise illegal mining, popularly called galamsey.

The President launched the programme under the theme: “Creating alternative jobs to illegal mining for sustainable national development.”

The President said NAELP is seeking to perfect the unavoidable and unintended hardships which the efforts to sanitise the small scale mining sector has created, particularly in the five regions that the government’s ‘Operation Halt II’ was carried out to clamp down on galamsey activities. 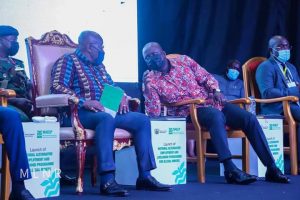 He said NAELP will focus on reversing the negative impact of illegal mining on the environment, through the National Land Reclamation and Reafforestation component of the programme.

The President said the country’s God-given natural resources are meant to be explored and “we are committed to its judicious use for the socio-economic development of our country.”

The President said the Community Mining Schemes will be supported by the Mine Support Services, and that together, they are expected to create some 220,000 direct and indirect employment, and reiterated that the government will not condone any illegal activities in the mining sector.

He then urged all Regional Coordinating Councils, and Metropolitan, Municipal and District Assemblies in areas where the Programme will be implemented, to give their full support for its implementation.

“Additionally, on my instructions, the Ministry of Finance has committed to make adequate budgetary allocation in the upcoming 2022 Budget and Fiscal Policy of Government to fund this very important Programme,” the President revealed.

He made it clear that his government is in full support of responsible small scale mining activities, as it provides an avenue for Ghanaians to participate in the mining industry, and contributes substantially to the country’s gold exports.

He said available data shows that the small scale mining industry accounts for over forty per cent (40%) of the country’s gold exports, and played a critical role in making Ghana the leading producer of gold in Africa, and said that cannot be undermined but insisted that activities in the sector should be carried out responsibly.

“What we cannot do, and will not allow it to happen, is to permit mining activities that threaten the environment which sustains our lives and the lives and livelihood of generations yet unborn,” the President said.

The Minister for Lands and Natural Resources, Samuel Abu Jinapor said the negative environmental impacts of illegal mining reached its crescendo, between 2014 and 2016, with a near total breakdown of the regulation in the sector, adding “this, in 2017, led to a moratorium on small scale mining, and the establishment of the Inter-Ministerial Committee on Illegal Mining (IMCIM).”

He added that after some initial successes, the illegalities in the sector resurfaced, leading to the President’s call for a dispassionate, non-partisan and broad-based National Dialogue on small scale mining.

He said the dialogue adopted several policy measures needed to deal with the menace of illegal mining and its devastating consequences on the environment.

He revealed that five community mining schemes, with twenty (20) concessions, have been launched in Mmampehia in the Ahanta West Municipality, Kwabre-Nuba in the Jomoro Municipality, Adukrom in the Ahafo Ano South-East District, Jacobu in the Amansie Central District and Akyim Abaam in the Kwaebibrim District so far.

“These five schemes, have the capacity to employ some twenty-six thousand, three hundred (26,300) people in direct and indirect employment. We expect to launch a total of eighteen (18) schemes with hundred (100) concessions, by the end of the year,” he said.

He disclosed that the ministry has decentralised the operations, reorganised the licensing regime and began far reaching reforms at the Minerals Commission, as well as the roll out of an online application system for miners.

He added that the final major block of the framework required to regulate the age-old small scale mining sector, is the launch of the NAELP for illegal miners.