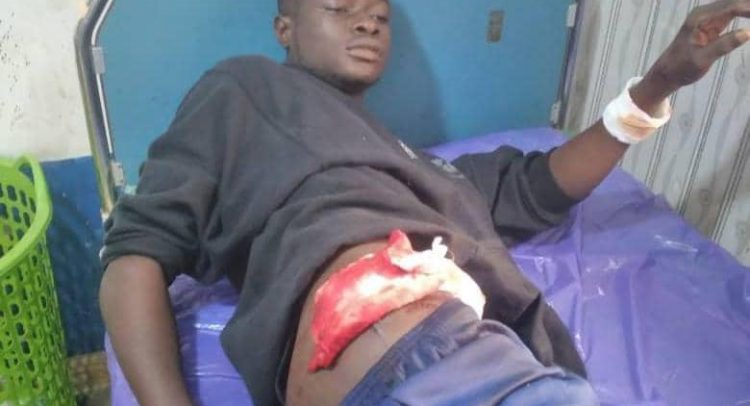 Two young men who sustained gunshot wounds during a protest at the premises of Future Global Resource, formally Golden Star Resources in the Prestea Huni-Valley Municipality of the Western Region are in stable condition.

The victims, Collins Asmah and Bright alias Frenchman, were rushed to the Prestea government hospital after the incident where both were treated and discharged on the same day.

Municipal Chief Executive (MCE) of Prestea Huni-Valley, Dr Isaac Dasmani, who confirmed this to the media said the Police Officers were invited to the scene to maintain law and order.

He emphasized that they never thought of harming the demonstrators but while attempting to disperse the crowd the unfortunate incident happened.

The MCE said although calm had been restored he would be having a Municipal Security Council meeting soon to address the issues raised by the protesters.

Information gathered indicated that in the early hours of Tuesday the youth of Dumasi invaded the premises of Future Global Resource to demonstrate against the Mine for refusing to fulfill their promise of resettling the community.

As a result, residents of Dumasi have been banned from embarking on any developmental projects.

This, however, irritated the youth to set the company’s digital security post, union office, and other places a blazed.

The angry mob then marched to the administration block where they destroyed air conditioners and ransacked some offices.

Isaac Essien, Youth leader of Dumasi, said the community had engaged the company persistently on their challenges but to no avail.

He added that “the company finally agreed to meet the community on Monday July 26, 2021, at 10:00 am to respond to our concerns. We waited patiently but they did not show up, so it led to the demonstration where two people were shot by the police”.

Meanwhile, the company has released a statement on the demands of the youth and it was signed by the General Manager, Ahmed-Salim Adam.

He said they need a collaborative approach to address these and other grievances in the short, medium, and long term, and in an environment of trust and mutual respect.

“Such an environment can only be developed through a long-term commitment to constructive engagement. We would, therefore, like to propose the setting up of a working committee comprising the chief and representatives from Dumasi community, the MCE of Prestea Huni-Valley, and other relevant stakeholders, to gain a common understanding and agree on a sustainable way forward” Mr Adam explained.

He also said “We propose that a scope and schedule of the working committee should be developed and promote constructive dialogue between the parties involved, to foster a strong and trustworthy relationship that would help us deliver economic value to our communities, responsibly manage our environment and sustain our operations”

The statement further said it was important that the working committee is set up for success and that all parties are properly prepared, as this first engagement involves multiple stakeholders and several issues, some of which date back many years.

“We hereby propose that the first meeting takes place in approximately one month. As well as providing the opportunity to form the Working Committee, this first meeting is essential to discuss the practical time frames, ownership, and hand over of the infrastructure projects ” the general manager noted.

The statement implored the community to see the meeting as the beginning of a new chapter in the relationship between the Mine and the Dumasi community.

COVID-19 Has Impacted On Economy-Finance Minister