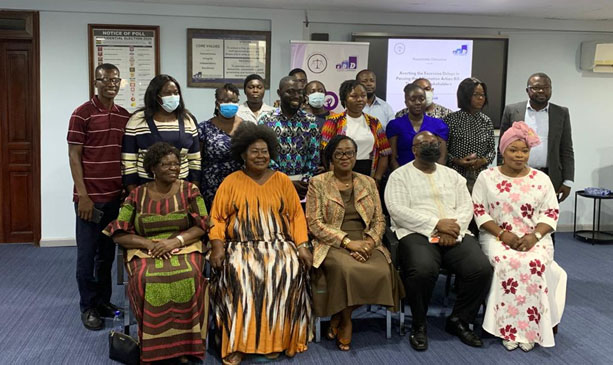 According to the coalition, the passage of the bill will have to be given further push by the gender minister for it to see the light of day.

“We do not have a minister in place to push this bill for us. In the absence of that, we will plead with the current caretaker minister to make this a priority,” Convener of the Coalition, Sheila Minkah-Premo said at a round table discussion in Accra.

She said the purpose of some sections of the 1992 Constitution that give rights to gender equality are being defeated due to the delay in the passage of the bill.

“Our Constitution in Article 17 says there shouldn’t be any discrimination on the basis of gender. That means we shouldn’t have a law which benefits one particular gender against the other.

“So, one of the things we stand on to make a push for this law is that a lot of research have been done and it’s been found that there’s a lot of discrimination, particularly, against women socially, economically and educationally. It is time for Parliament to enact this law,” she added.

She, thus, called on the executive arm of the government to give approval of the bill so it is laid in Parliament as soon as possible.

“The international community including the United Nations is looking at us to pass this law before 2022 ends,” she said.

However, since its introduction over 10 years ago, the bill has been on the shelves despite several pledges by the executive and legislative arms of government to have it passed.

The theme of the roundtable discussion was, “Averting the Excessive Delays in Passing the Affirmative Action Bill, the Role of Stakeholders.”

Programme Manager CDD-Ghana, Regina Amanfo Tetteh, stated that the organisation is committed to advocating to get the AAB passed into law.

She said the passage of the bill would illustrate the country’s commitment to improving governance and in securing inclusive development.

Journalist, Emefa Apawu, spoke on the role of the media in averting the excessive delays in passing the Affirmative Action Bill.

She stated, “I am of the view that the media has the power to avert the excessive delays in the passage of this all important Affirmative Action Bill. But that power can be fully utilised or unleashed if the media is first and foremost fully armed with information, to know it relevance and help in advocating for the bill.”