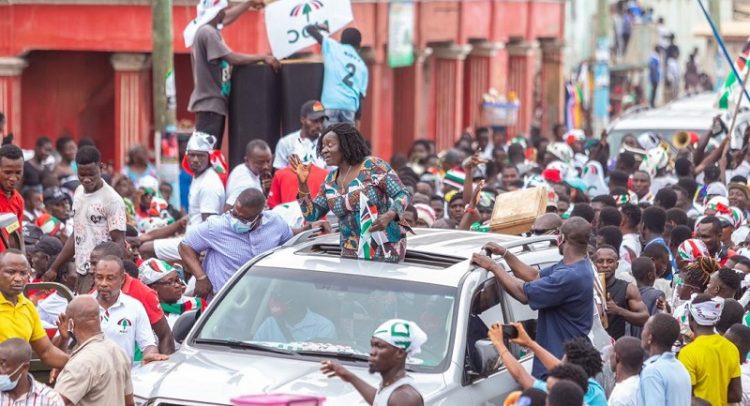 Prof Jane Naana Opoku-Agyemang during one of her campaign tours.

The Vice-Presidential Candidate of the National Democratic Congress (NDC), Prof. Jane Naana Opoku-Agyemang has put on hold her campaign in the Central Region.

Her decision comes a few days after the party’s Flagbearer, John Mahama suspended his four-day campaign tour of the Bono Region over the alleged missing names in the voters’ register.

Prof. Opoku-Agyemang did not state what necessitated the suspension of her campaign in the region she hails from.

She, however, clarified that the decision was taken in consultation with the Flagbearer of the party.

“Effective close of day today, the running mate will suspend her campaign tour of the Central Region. There are a number of reasons for that. However, it is a national decision taken in consultation with the Flagbearer who has also suspended his campaign activities effective today. Details will be given tomorrow by the Flagbearer and the party” a statement signed by Mawuena Trebarh, Spokesperson and Head of Communications for the running mate said.

Prof. Opoku-Agyemang was expected to embark on a six-day campaign tour of the Central Region.

She was visiting the region after touring eight other regions where she propagated the NDC’s manifesto.