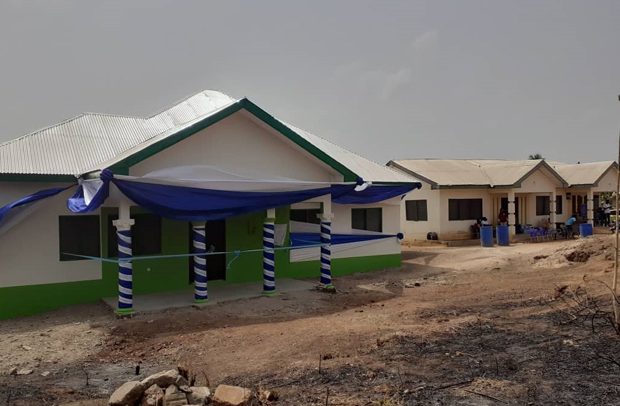 The New Martenity Home with the CHPS compound beside it.

The project which is estimated to cost Ghc367,752.00 and located in Alavanyo Dzogbedze was built to complement the existing Community-Based Health Planning Services (CHPS) Compound which served three out of the seven divisions of Alavanyo.

The Project is in fulfilment of a promise after a request from the community.

It was commissioned to also commemorate the 15th Anniversary of the enstoolment of Mamaga Ametor.

Rita Enyonam Agor who used to lead a team of three community health nurses at the facility until her study leave, narrated how challenging it was to provide essential basic health services to the over 9000 residents that make up the three out of seven beneficiary Alavanyo communities namely Dzogbedze, Deme and Agorme.

Anador Peace who now leads a team of two says apart from the basic services, they assist most of the women with home deliveries since they are unable to travel the 15km journey to Kpando Margaret Marquette Hospital for deliveries.

With the new maternity facility built with the support of GCB bank; skilled deliveries can be made in Alavanyo as midwives will now be posted there to support the Community Health Nurses. 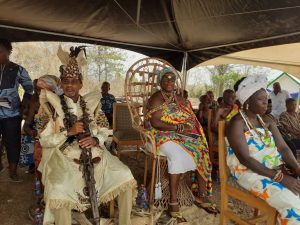 Apart from antenatal, vaginal deliveries, early detection of complicated conditions and referrals will be enhanced.

Ms Anador also observed that infections associated to home deliveries will reduce, while the CHPS Centre can be easily upgraded to a Health Centre and also take referrals from other communities. It will also reduce pressure on the Hospital in Kpando. She only prayed that accommodation will be made available to house midwives to be sent there.

Speaking at the 15th Anniversary durbar, Dr. Pius Mensah, the Acting Municipal Director of Health Services said they will work with key stakeholders to ensure the facility is well equipped. The Volta/Oti Regional Manager of GCB Bank, Alhaji Mohammed Mipo Osmanu hinted that the bank may also consider the furnishing and equipping of the facility.

The Paramount Chief of Alavanyo, Togbe Tsedze Atakora VII commended her queen for showing exemplary leadership and giving women in the area a safe place to deliver. He assured all and sundry that Alavanyo is a peaceful place and so, they should go and be ambassadors of the area.

Dr. Belinga Gabriel Patrick, a Cameroonian Orthopedic Surgeon described Ghana as his second country stressing that I am impressed by culture, tradition and rules that govern the country.”

Mamaga Ametor Hoebuadzu II known in private life as Barbara Peace Atiboli urged traditional leaders not to use their position to oppress their subjects, but uplift them.

She appealed to youth in Alavanyo not to allow themselves to be used by dishonest politicians or individuals with parochial interest, but instead access them and vote for those who will bring them real development.