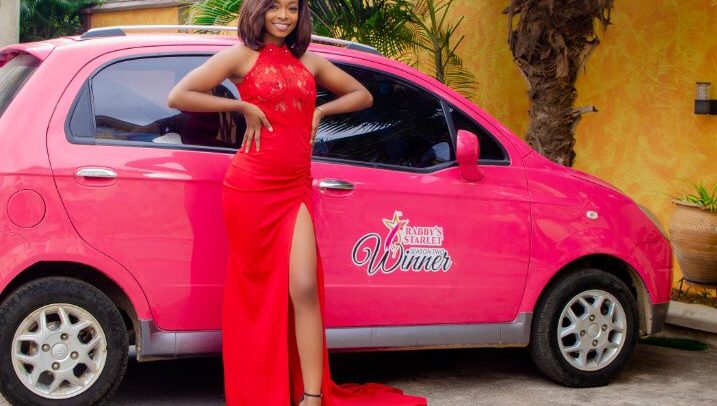 Sonia Owusu, winner of season 2 of RabbyStarlet reality show has been stripped off her title fourth months after she was crowned.

In a statement issued by organisers of the show on Saturday, it said it decided because “Sonia Owusu has failed to abide by the rules associated with the office of the ultimate Queen of ‘RabbyStarlet.”

She has therefore been replaced With Nutifafa Ruthy, a level 200 student of Central University as the new ultimate Queen for season 2 of the reality show.

Nutifafa was announced on Saturday after a brief ceremony in Accra to crown her. She was presented with a new contract, GHC10,000 to start a business and a car.

After the crowning Nutifafa promised to live up to expectations and do her best to lift the name of ‘RabbyStarlet’ higher.

“I didn’t expect to be crowned winner but, I’m ready, so expect the best from me. This is a big win and I’m so excited”, she added.

A spokesperson for the ‘RabbyStarlet’ reality show, Ivy Frimpong explained that the decision to crown Nutifafa as the new queen wasn’t an easy choice; neither was the stripping of the previous queen Sonia Owusu.

Nutifafa Ruthy is currently pursuing a Bachelor’s Degree in Business Administration and Management at Central University and joggles this with her profession as a Pharmaceutical Assistant at a medical centre in Accra. As the new Queen, she is expected to execute one community social project and carry on with the ambassadorial duties of the reigning queen.

The ’RabbyStarlet’ is a reality TV series that camps eight (8) ladies at a luxurious mansion to exhibit their talents.

It runs for 13 weeks and contestants get evicted at a point.

The icing on the cake is contestants take part in individual social projects as part of the requirements of the show. These include ‘Women Empowerment Tour’, ‘Self Acceptance Tour’, and a ‘Teenage Pregnancy Tour’. Sonia won the show in April 2022 but has been stripped off her title.