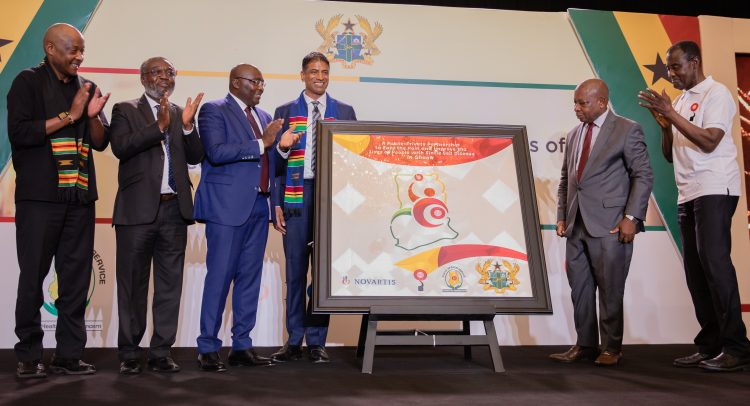 Dr Bawumia being assisted to unveil the partnership logo

Vice-President Dr. Mahamudu Bawumia has launched a Public Private Partnership (PPP) that will see the expansion of access to sickle cell medication and related treatment to people living with Sickle Cell Disease (SCD).

The PPP between government, pharmaceutical giant, Novartis, and the Sickle Cell Foundation Ghana will improve the diagnoses of SCD and accelerate treatment for people with the disease in the country with the introduction of hydroxyurea to the treatment line at an affordable cost.

Specifically, the partners will collaborate on field testing and implementation of SCD treatment guidelines, the establishment of cross-regional centres of excellence and the implementation of newborn screening at these centres.

Dr. Bawumia, speaking at the event which brought together over 500 stakeholders in the health sector, said Ghana by the PPP would be the first African country to ensure that hydroxyurea is accessible to people living with SCD at an affordable cost.

He said government was working to ensure the cost of hydroxyurea is covered in the National Health Insurance Scheme (NHIS).

The Vice-President said there were steps being taken to advance discussions for the acceleration of parliamentary budget approval of hydroxyurea coverage.

In Ghana, it is estimated that 15,000 babies are born with sickle cell disease annually out of which 90 per cent die before they are five years old due to preventable complications.

Hydroxyurea treatment is highly effective in treating SCD by reducing the incidence of vaso-occlusive event, infections, malaria, transfusion and death.

Health Minister Kwaku Agyemang-Manu said the five-year agreement would focus on four key areas such as treatment, diagnosis, research and advocacy to help reduce the burden of SCD.

He said already the Health Ministry had taken delivery of 20,000 free hydroxyurea medications with the number expected to increase to 60,000 by the end of the year.

The medications, he said,  would be distributed free of charge to patients with SCD who had registered with sickle cell centres, particularly children under five years, by trained doctors in the various hospitals.

The Chief Executive Officer (CEO) of Novartis, Dr. Vas Narasimhan, expressed his excitement at the partnership, adding that Novartis would be developing a paediatric formulation of hydroxyurea to enable easy administration to babies. He thus encouraged newborn screening of the SCD.

He further said that Novartis would be scaling up the programme in other sub-Saharan African countries.

“Novartis has a long-term commitment to ensure that our medicines and healthcare in general are accessible to as many patients as possible…I am proud that Novartis is committed to addressing this challenge,” he said.