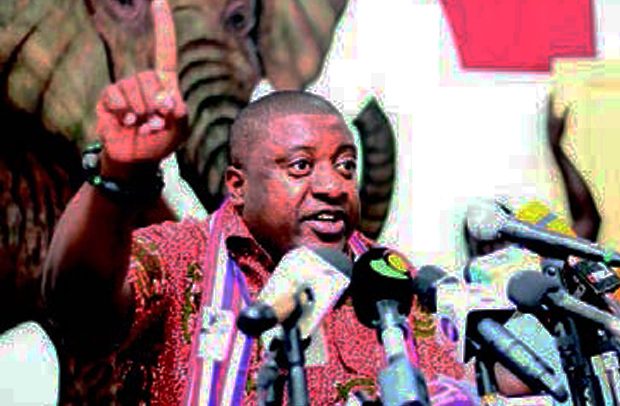 Nana B addressing the media

The National Youth Organiser of the ruling New Patriotic Party (NPP), Henry Nana Boakye, aka Nana B, has said the opposition National Democratic Congress (NDC) has mastered the art of political mudslinging but lacks basic ideas to move the country forward.

The NPP challenged the NDC to come forward with a single alternative policy that can change the fortunes of the country for the better and refrain from personal attacks and character assassination that they are always engaged in.

At a heavily attended news conference in Accra yesterday, Nana B responded to the NDC’s ‘jokes’, hinting that “the issue of family and friends did not emanate from the NPP.”

The ‘jokes’, according to Nana B, were couched in the form of a list the NDC produced to make it look like President Akufo-Addo is running a nepotistic government.

He said, “The NDC’s own Alban Bagbin is the one who indicated that the NDC party while in power was running a family and friends business.”

According to Nana B, the NPP initially was restrained from replying the NDC on the so-called ‘family and friends’ propaganda, but said, “letting it go unattended to could be misconstrued as the fact.”

He said emphatically that President Akufo-Addo is not running a ‘family and friends’ government and has also not put square pegs in round holes.

Nana B said that the best definition of ‘family and friends’ is when John Mahama as president deliberately sold about 80 per cent of a national asset like Ghana’s bauxite deposit worth about GH¢200billion to his junior brother and supervised the issuance of 44 dud cheques to deceive the Ghana Revenue Authority.

He said, “While the NDC is on a hunt for ideas, they decided to put a break to it only to disturb the whole country with lies and insults. The party should therefore address their own problem and not rope NPP into it.”

He said the opposition party has proven that they lack ideas to manage the country and it would be dangerous to hand over the reins of government in their hands.

“Politics is a serious business. Opposition parties must be serious with alternative policies and not resort to jokes as is being done by the current opposition NDC,” he said.

He added that due to the lack of seriousness on the part of the opposition party, it would be “cheap and unproductive” for the NPP to engage them, reiterating a call made by the party’s Communication Director, Yaw Buaben Asamoa, that the NPP would not fall for the NDC to set agenda for the 2020 general election.

He said the NDC has been dazed by the good testimonies of the President’s hard work and would want to equalise it rather bizarrely with insults.