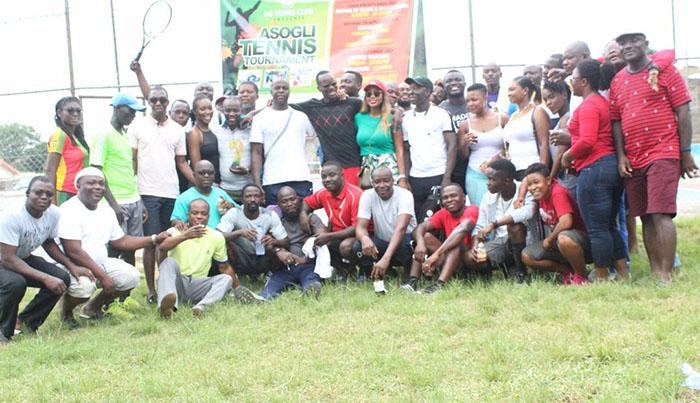 The participants in a pose

Skippered by Rahim Abloh, RMU were too hot for their hapless opponents to contain in both the singles and doubles games, which was massively patronised by tennis lovers in the Ho municipality.

In all, seven games were supposed to have been played, but they were called off due to continuous rainfall. RMU were judged overall winners after winning four games‒ two singles and two doubles, with Ho Tennis Club winning one of the doubles games.

In the singles competition, the Chairman of Ho Tennis Club, Dr. Cyril Bansah, could not withstand spirited Thomas Ohene Effeh as he lost 2-7. Jacob Amoakoh added another win to RMU as he breezed past Peter Akpeh.

In the doubles event, Thomas Ohene Effah paired with Coach Kenneth to oust David and Joe of Ho Tennis Club 7-0. Alex and David of RMU showed their superiority over Dr. Biney and Dzamesi with a 7-2 win.

The match of the day was a ‘doubles game’ between Dr. Bansah and partner Osman. The duo put up spirited performances to surpass Abloh and Amoakoh 7-5

Speaking after the tournament, Dr. Cyril Bansah expressed his appreciation to the clubs for honouring the invitation and making the tournament an interesting one.

He added that this year’s edition of the tournament was geared towards mobilising funds for ongoing development projects in clubs.