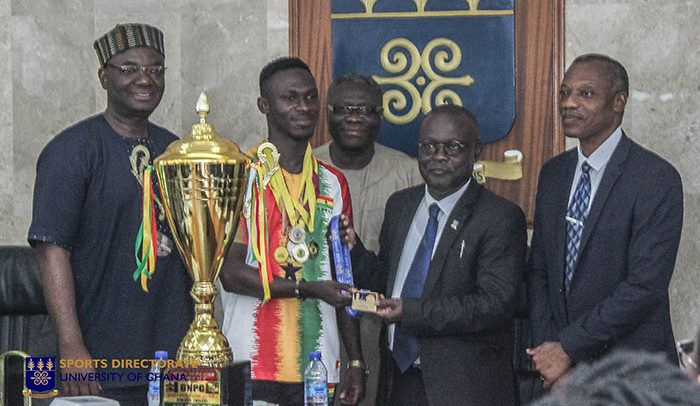 Prof. Ebenezer Oduro Owusu (2nd R) having a feel of the gold medal from Azamati. With them are Dr. Bella Bello Bitugu (L) and other officials

The 21-year old ran a splendid back-straight as Ghana’s 4x100m quartet of Sean Sarfo-Antwi, Martin Owusu-Antwi and Joseph Paul Amoah stormed to a surprise gold medal ahead of favourites Nigeria at the recent African Games in Morocco.

The exploits of the relatively younger and inexperienced sprinter who punched above his weight in a breakthrough season which saw him winning gold medals at both national and international levels of competition has not gone unnoticed by sports pundits.

Azamati, a level 300 Bachelor of Science in Marine Science, stood in an open car, holding the trophy he recently won at the Ghana’s Fastest Human to cheers from his fellow school students and university workers.

He was paraded through some of the principal streets of the university campus, including from the UG Sports Directorate, Banking Square to Mensah Sarbah Hall, School of Business to Volta Hall, Commonwealth Hall and ended at the school’s registry, where a management meeting was being held. They were met Prof. Ebenezer Oduro Owusu.

The Director of Sports at the UG Sports Directorate, Dr. Bella Bello Bitugu, spoke highly of Azamati as a relatively unknown athlete who had come through the ranks of the university system and blossoming to greatness within a short space of time.

Dr. Bello introduced the mother of Azamati, Madam Faustina Azamati, to the university’s top management and Reks Brobby, founder of the Ghana’s Fastest Human, as ones who had helped shape the young career of the athlete.

Prof. Oduro Owusu told the gathering that the story of Azamati is one of the great examples of the impact of the University of Ghana’s policy on the admission of athlete students (UGPAAS).

Azamati is due to compete as a member of Ghana’s 4x100m relay team at the upcoming IAAF World Championships at Doha 2019 from September 27 to October 6 this year.