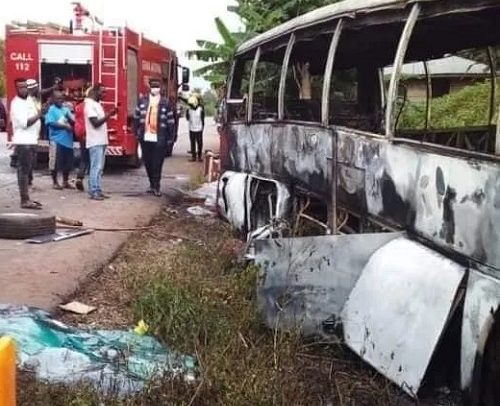 Six more people are feared dead after a speeding passenger bus rammed into a stationary Rhino vehicle and caught fire at a police checkpoint at Akomadan on the Offinso-Techiman Highway on Tuesday dawn.

It brings to 23, the total number of lives lost barely 36 hours in that enclave after another passenger vehicle killed 17 on the outskirts of Abofuor near Offinso on Monday dawn.

The bus was said to be coming from Lawra in the Upper East Region towards Kumasi when it crashed and caught fire, and according to sources, the driver is still at large.

A police report on the accident said “On 2/11/2021 at about 4:30 am, an unidentified suspected driver now at large was driving Daewoo Grandbird KS Bus No. GT 4215- 17 from Lawra towards Kumasi with about 32 passengers on board. On reaching Akumadan Forest Police Snap Check Point, he was signaled by the police to stop but he refused when he realised that there was a Kia Rhino Recovery Truck No. GB 6983 – 12 from Kumasi direction which had been stopped by the duty men for inspection on its lane with the headlights on.”

The report continued that “but the bus driver in an attempt to swerve to a safe area ran into the said recovery truck. The force of the impact pushed the recovery truck into a nearby bush at the right side of the road and got damaged. The bus also landed at the left side and caught fire.

The report further said “26 victims struggled to come out from the bus with minor injuries and about six victims were trapped and burnt beyond recognition. Surviving victims have been rushed to Akumada Government Hospital for treatment. Efforts are underway to trace the driver and the families of the deceased, and accident vehicles also to be towed to the station.”

On Monday dawn, another gory accident occurred where 17 people were killed on the Offinso road.

It happened when an articulator truck veered from its lane and crashed into an oncoming Sprinter bus full of passengers around 3am.

The impact of the crash was said to be so strong that 17 people, including 14 females and three males, died on the spot.

About 15 others, who were also in the Sprinter bus, registered GT 6075-15, survived and were hospitalised.

DSP Edmund Nyamekye, Head of MTTD Offinso, who confirmed the crash, said the truck, registered GS 4339-17, was from Techiman to Kumasi and the passenger bus was from the opposite direction.

“If you want me to be an Ambassador, I will always say it as it is and put you on your toes,” the Asantehene had said.

“There are rules and regulations in driving. From the person teaching, through to licensing up to hitting the road, all have their respective roles to play in this safety process. Almost everyone is abusing the road traffic regulations in the country but in other jurisdictions you do not see such things.”

He had said “the NRSA has the mandate to regulate the system whilst the police is supposed to check traffic offences. So, I ask the NRSA what collaboration do you have with the police to ensure the system functions well?”

The Otumfuo said “if we want to ensure proper regulation, the police must do its work well, the DVLA must ensure proper checks, drivers like the GPRTU, and Taxi Unions must play their roles effectively.

“A driver who is fatigued, the one with faulty brakes stopped by the police and allowed to go without any punishment, the one doing unnecessary overtaking without any knowledge on road signs are all factors contributing to the carnage on our roads.”

He told the NRSA that “you can have all the titles but if we are not able to regulate all these things, then we cannot stop the carnage on our roads.”

President Akufo-Addo, who currently is attending the Climate Change summit in Glasgow, Scotland, posted on social media to express his condolences to the bereaved families and wished the survivors a speedy recovery.

“I have learnt with considerable sadness of the tragic accident, at Akomadan, that has claimed lives…in the early hours of this morning. I extend my condolences to families of the deceased and wish the injured a speedy recovery,” he said on Twitter, adding, “I continue to urge all road users, especially our drivers, to drive safely always, and help reduce the spate of road accidents in the country.”