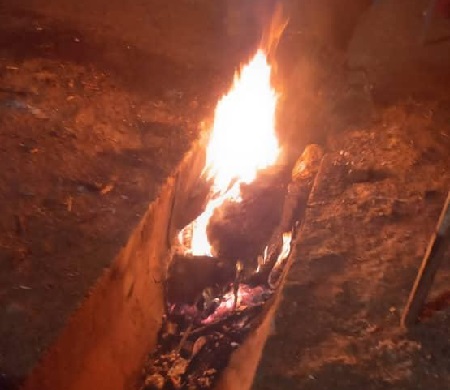 The robber burnt in the gutter in Karaga

Residents in Karaga in the Northern region have shot and killed a suspected armed robber in the area.

The incident happened on Thursday ,December 17 at about 7:30pm.

The murdered robber was subsequently burnt by residents after a robbery attack on a mobile money vendor in Karaga.

Information gathered by DGN Online indicates that the robbers numbering about four stormed the area and fired gunshots discriminately.

A community member, one Imoro Alhassan was however hit by a bullet and sustained injury on the leg.

The robbers were able to rob a mobile money vendor named Miftawu Mohammed of an undisclosed amount and bolted with the booty.

Three of the robbers escaped but luck however eluded the deceased when his motorbike failed to move after the robbery, enabling residents to pounce on him and beat him severely.

The deceased was then pushed into a nearby gutter and burnt by the residents.

The Northern Regional Crime Officer, Supt Bernard Baba Ananga,who confirmed the incident to DGN Online , said the body of the deceased has been transported to the Tamale teaching hospital for autopsy and preservation.

Supt Ananga however said police have commenced investigations into the matter to arrest community members who took the laws into their own hands as well as arresting the suspected robbers who escaped.