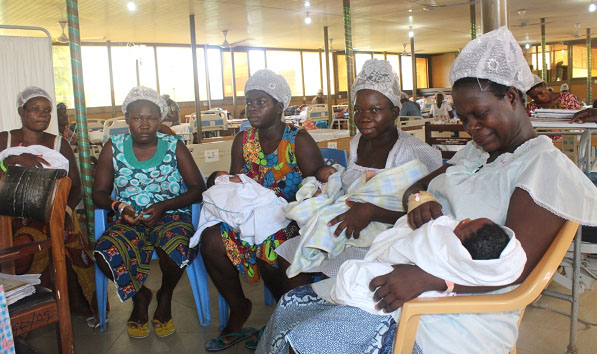 Some of the beneficiaries and their babies

The youth choir of Royalhouse Chapel International – Voices In Worship – has discharged close to 15 mothers from the Tema General Hospital.

The mothers, who were detained at the maternity ward for non-payment of their medical bills, were released to go home after the choir made the payment totalling over GH¢7,000 on their behalf.

The gesture by the youth choir formed part of its annual social intervention programme in honour of mothers dubbed: “Baby Project”.

Over the years, through the inspiration of the Founder and Apostle General of Royalhouse Chapel International, Rev. Sam Korankye-Ankrah and his wife, Rev. Mrs. Rita Korankye-Ankrah, the choir has visited the underprivileged in places such as the Korle-Bu Teaching Hospital and the Osu Children’s Home to pay medical bills and donate items.

Speaking with the media, the pastor in charge of Voices In Worship, Albert Ayittey Nii Tettey, said the intervention was in fulfillment of the motto of Royalhouse Chapel International: “Touching our Generation with the Power of God”.

He disclosed that there were other women who needed such assistance and thus urged other organisations to step in to support them.

“Really, this is a very good intervention; Tema General Hospital is really touched by this philanthropic act and the mothers have been discharged,” she remarked.

“As I know, the Bible teaches that when one is hospitalized, there is a need to visit that person. You have not done that alone but you have gone a long way to actually discharge them from their state and I believe this is really remarkable on your part,” she added.

One of the beneficiaries, who was overwhelmed by the gesture of the choir, broke down in tears when she was told her debt had been paid.