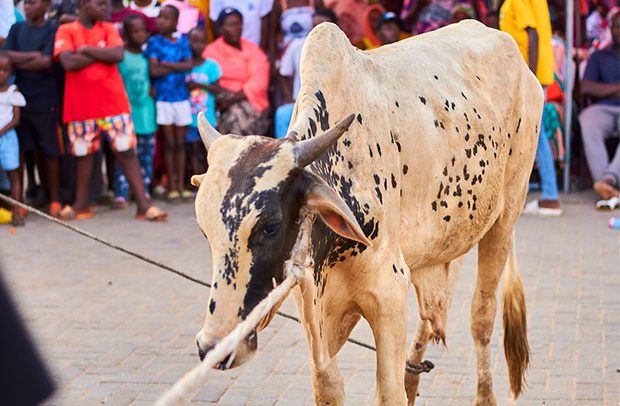 Fadama Zongo has brought pride to the office of the National Chief Imam after winning the prized cow at the just-ended ‘Salah Food Fest’ cooking contest, organised by Happy98.9FM.

Fadama Zongo, represented by team Insha Allah, proved that they had the blessings of not only Allah, but that of the National Chief Imam, His Eminence Sheikh Dr. Osman Nuhu Sharubutu, as they beat competition from other Zongo communities in the capital to win the coveted prize.

The lingering aroma of their food around the Fadama lorry park and its environs and the tastiness of their food were not the only criteria for selecting them as winners. The judges commended the team for their novelty, hygiene, cooking technique and above all the iconic presentation of their finished meal.

The team, which was elated by the victory, gave praise to Allah for assuring their win and the entire Fadama community for showing up to support them. They called on Happy FM to keep organising contests of this kind to not only give them bragging rights but to build long-lasting bonds amongst the Zongo communities.

Programmes Manager for Happy 98.9 FM, Elwood Mantey, praised the various teams for showing up and engaging in a healthy competition. To him, there is no other way to display sportsmanship and unity than through cooking.

“We decided to take this year’s edition a notch higher by organising zonal contest in four communities after which the winners qualified for the grand finale being experienced today. “Mini competitions were held in Nima, Kasoa, Tema and Abeka. What you see today is only the concluding part of a three-month campaign with the objective of bringing unity among Zongo communities and showcasing the rich culture and cooking habits of Muslims,” he disclosed.