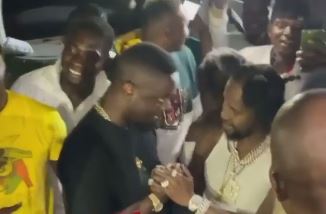 Rapper Sarkodie appears to have settled his issues with Stonebwoy as latest video showed him visiting the dancehall reggae artiste and Jamaican superstar Popcaan on a set of their video shoot in Ashaiman.

Sarkodie fell out with Stonebwoy in August 2020 after the dancehall act allegedly “physically assaulted,” his manager, Angel Town following a disagreement between them.

The incident occurred at the final rehearsal and pre-recording stage of Sarkodie’s ‘Black Love’ virtual concert in Independence Square in Accra in 2020.

Stonebwoy was allegedly not happy he had to wait for a long time to do his session despite arriving on schedule.

This allegedly led to a disagreement which subsequently escalated into a scuffle between him and Angel who allegedly sustained injuries in his eye.

Stonebwoy had come out to apologize to Angel and denied allegations that he even brandished a gun during an altercation.

Sarkodie according to reports at the time reported Stonebwoy to Police. Since the incident both musicians haven’t shared a common platform as they do, giving the impression that there was some form of animosity between them.

But Sarkodie’s alleged appearance at Popcaan and Stonebwoy video shoot has put to rest the claims of squabbles between them.

Sarkodie was captured having chitchat with Popcaan and Stonebwoy while Stone’s fans, Bhim Natives shower praises.