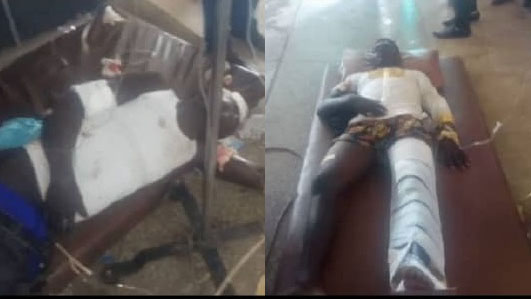 FIVE MEMBERS of Saviour Church are reported dead with 17 others seriously injured after they were involved in a car accident that occurred on Monday, June 3, 2019.

The accident happened between the Anyinam and the Akyem Enyiresi on the Accra-Kumasi Highway after Bunso Junction in the Eastern Region.

The dead and the surviving victims are members of the Kumasi branch of the Savior Church Of Ghana.

The Church is located at Osiem.

They had reportedly attended their annual convention over the weekend and were returning to Osiem when the incident happened.

They were on board a Sprinter bus with registration number GT 6856-19.

According to information gathered by DGN Online, one of the tyres of the bus burst, causing it to rollover.

An eyewitness who narrated the incident to this portal said three of them died instantly and 19 were seriously injured.

He said two of the injured died later at the hospital.

Meanwhile, the bodies have been sent to Kumasi and deposited at Okomfo Anokye Government Hospital’s morgue.

The injured victims were receiving treatment at Akyem Enyiresi Government Hospital as at the time of filing this report.

Police were also investigating the cause of the accident.