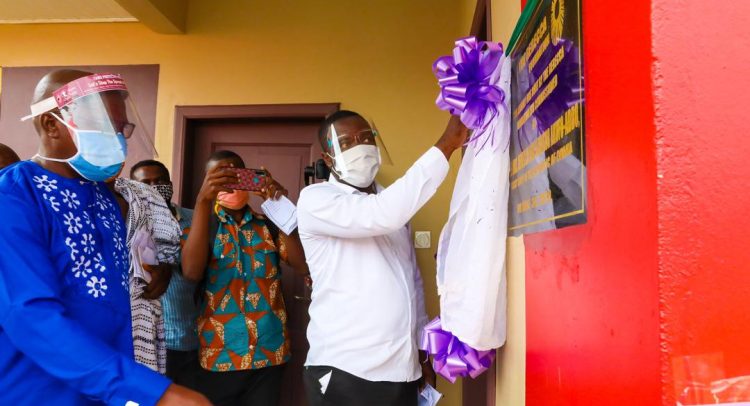 The Rebecca Foundation has handed over a modern standard library to the people of Sefwi Debiso in the Bia West District of the Western North Region.

The new facility brings to three the number of libraries the Rebecca Foundation has handed over to communities in the country so far.

The library is to help inculcate the habit of reading in school children as a means of improving on their learning skills.

Presenting the library to the people of Sefwi Debiso on behalf of the Rebecca Foundation, Press Aide to the First Lady, Richard Darko noted that Mrs Akufo-Addo was someone who strongly believes that “literacy is the means by which lifelong learning and a child’s ability to learn to the highest level is made possible.”

He noted that Mrs. Akufo-Addo
therefore considered it a priority for every child to have access to learning materials wherever they find themselves.

District Chief Executive of Bia West District, John Koan, who received the keys to the Library expressed gratitude to the First Lady for helping them with this library since it will go a long way to improve the reading skills of the children in the district.

Philip Yaw Asamoah of the Ghana Library Authority also thanked the First Lady for helping the agency meet one critical objective in its ‘2020 Year of Learning’ which is to increase the network of Libraries in the Country.

“Since 2017, government through Ghana Library Authority has increased library networks from sixty-one to seventy-four and now seventy-nine with the new libraries by the Rebecca Foundation,” he said.

Ghana, US Work Towards Zero Malaria Deaths by 2030