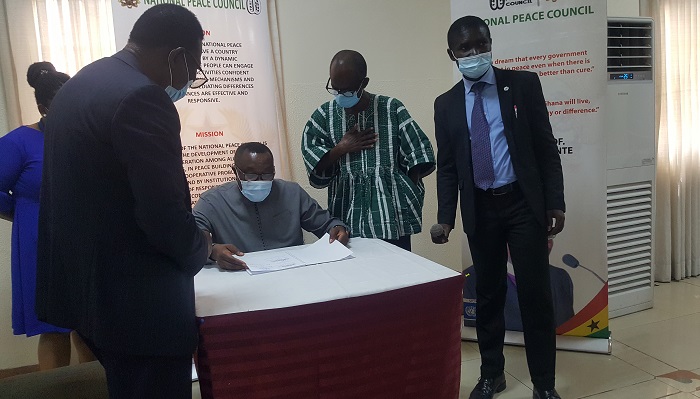 On Wednesday, the National Democratic Congress (NDC) had a change of mind and appended its signature to the document which seeks to bring a closure to the dirty and uncivilized phenomena of vigilantism in the country.

It appeared the party undertook the action under a form of duress the nature of which is unknown to us safe the party leadership.

It did not make sense for it to agree to abide by the civilized path of ensuring peace in the country regardless of which occasion even while grumbling and mumbling about non-issues.

It took so long for the party to decide to append a signature on the document, something which did not surprise most Ghanaians who know too well the nature of the party under review.

The party cut a picture of a child angry over something whose nature it would not reveal. It was a whole bundle of issues and even as it appended a signature with a heavy heart, of course, it said things which can best be described as gibberish.

It is our hope that the NDC keeps to its word.

We might wait and see whether after      the signature it would not continue the sabre-rattling of earlier weeks now that a new voters’ register is almost here.

One of the party’s assigns, a national chairman of a political party, Bernard Mornah, said he and others would kill themselves during the registration exercise. With the NDC now claiming to have departed from that path on paper, and therefore ostensibly, the party would have to give its boy a new assignment since the death at the centres is no longer on the cards.

With violent antecedents, the NDC, it would be recalled, used the unenviable epithet to emphasize its ability to be outstandingly cruel on the campaign path.

Now that it has appended its signature on the binding document of good behaviour and conduct perhaps we might see an NDC bereft of diabolical game plans ahead of the registration exercise and the December elections. Doing so with a grain of salt would not be unusual because the NDC, like the leopard, cannot change its colours; the spots are integral part of its feature. Perhaps the NDC has for once changed just so it can make itself appealing to Ghanaians, with the previous paths remaining unproductive.

That would have been wonderful because, after all, the bloody record of the party before it metamorphosed from its junta days does not appeal to Ghanaians anymore.