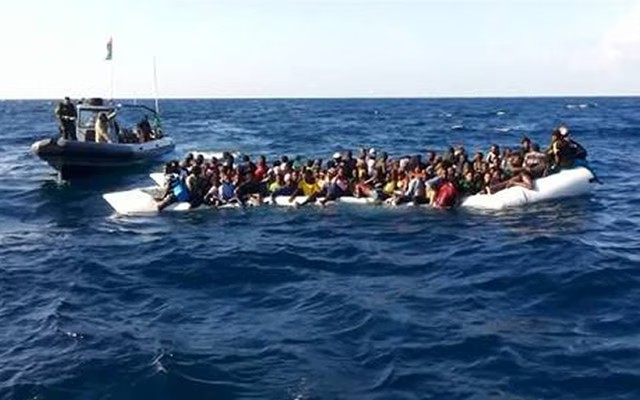 At least six people died, including a little girl, and almost 50 others were rescued after an overloaded migrant boat capsized off north Lebanon during a chase by naval forces, Lebanese officials said.

The boat carrying nearly 60 people capsized on Saturday night near the port city of Tripoli, the departure point for a growing number of people attempting a potentially lethal sea escape.

The deadly accident, weeks ahead of parliamentary elections scheduled for May 15, is not the first of its kind for the crisis-hit country grappling with its worst-ever financial crash.

But it marks a grim reminder of the suffering behind a growing number of people, including Lebanese nationals and Syrian refugees, risking their lives at sea in search of a future abroad.

“The army’s naval forces managed to rescue 48 people and retrieve the body of a dead girl… from a boat that sank while trying to illegally smuggle them out,” the army said in a statement.

“Most people on board were rescued,” the army said, without specifying their nationalities.

The army retrieved five corpses off Tripoli’s coast on Sunday, the state-run National News Agency reported, hours after the body of a little girl was returned to shore.

Wails of relatives rang out from a Tripoli morgue where the corpses were being kept, according to an AFP correspondent.

Dozens looked on as a group of men stormed into the morgue and pulled out the corpse of a victim for burial, the correspondent said.

Nearby dozens of young men lobbed stones at two army tanks, to vent their anger at the sea tragedy.

At Tripoli’s port, relatives of the missing impatiently waited for news of their loved ones.

“My nephew, he has five children and his wife is pregnant with twins. He was trying to escape hunger and poverty,” one man told AFP at the dockside harbour.

But it was crammed with nearly 60 would-be migrants and took to sea without any safety precautions, he told a news conference.

Dannaoui said the army tried to thwart the smuggling operation before the ship sailed out of the Qalamoun region, south of Tripoli, but could not reach the departure point in time.

“Unfortunately, the captain (of the migrant boat) decided to carry out manoeuvres to escape,” leading to the vessel crashing into the patrol ships, Dannaoui said.

The impact cracked the hull of the migrant boat, which quickly submerged, he said.

“In less than five seconds, the boat was underwater,” Dannaoui said, adding that passengers were quickly handed life jackets.

But one of the survivors said a naval ship had deliberately crashed into the migrant boat to force it back.

“Tho patrol boat crashed into us twice… to drown us,” the man told AFP at the port, before he was silenced and carried off by a crowd of survivors’ relatives.

The United Nations humanitarian coordinator for Lebanon Najat Rochdi called for an end to these repeated tragedies.

“It’s horrific to see deprivation still pushing people to take a perilous journey across the seas,” she said on Twitter.