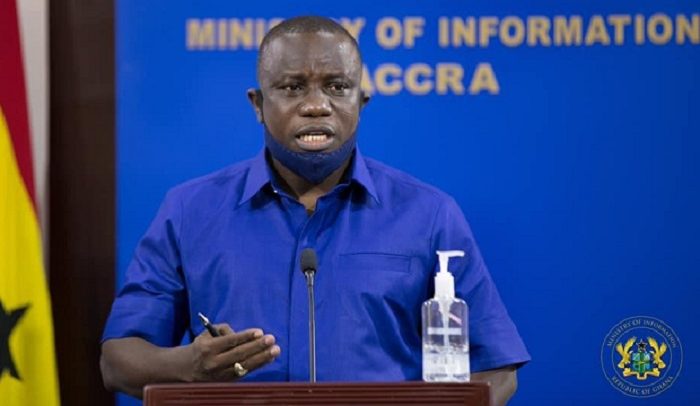 The Minister for Defence, Dominic Nitiwul, has slammed the Minority National Democratic Congress (NDC) in Parliament for asking the government to withdraw military personnel deployed to help protect the country’s borders and other entry points.

He said the mandate of the soldiers at the border towns is not to monitor or interfere in the voters’ registration exercise which commences today.

Since the deployment of soldiers to border towns, the NDC has been raising hell, claiming that the NPP government is using them to intimidate their people in the Volta and Oti regions, which are their political strongholds, ahead of the registration exercise.

The Volta Caucus of the Minority NDC, at a press briefing yesterday, gave the government a 24-hour ultimatum to withdraw the security personnel from the Ketu South Municipality in the Volta Region.

According to the Volta Caucus, the deployment is an attempt to intimidate residents of the border towns, especially those in the Volta Region, in the upcoming voters’ registration exercise.

Data from the Ministry of Defence is showing that military personnel have been deployed to all borders of the country since February 2019 and not Volta and Oti regions alone as being claimed by the NDC.

It is emerging that the government deployed 206 personnel to the Upper East, 110 to the Northern Region and 102 to North East border areas.

The NDC, after its Caucus in Parliament had spoken, held another press conference in Aflao where the outgoing Member of Parliament (MP) for Ketu South, Fifi Fiavi Kwetey, who was once the party’s Propaganda Secretary, made wild allegations against President Akufo-Addo and the NPP government for playing the tribal card.

“The bottom line is that as far as the NPP is concerned, the people of the Volta Region are foreigners; the Ewes are not Ghanaians,” Fifi Kwetey, who ran agriculture in the country aground during his tenure as sector minister under Mr. Mahama, claimed.

“This siege of the Volta Region dates back to NPP’s perennial hatred towards any group of people that they perceive as standing between them and their insatiable desire for absolute political power,” he said without any justification.

He said further that “those watching this looming danger but failing to speak up and condemn it should remember that their silence makes them accomplices and posterity will judge them if their own consciences fail to do so,” Fifi Kwetey said.

However, the Defence Minister at a counter-press conference insisted that the Minority members were only spewing “propaganda.”

“I want the people of the Volta Region to know that the information the NDC, Minority and former President John Mahama are feeding them is pure propaganda. It should be ignored. It is pure mischief,” he said.

He added, “We have deployed (soldiers) across the entire country and the purpose is to aid and support the Ghana Immigration Service to stop people from crossing (in) because we have too many unapproved routes and the Covid-19 numbers are getting higher and higher and we will not sit aloof and allow our people to die because people are crossing into our country.”

“I believe that if they are watching this press conference, they will revise their notes and they should be bowing their heads in shame because they lied to the people of Ghana. As we have all been told now, the numbers in the Volta Region are some of the lowest of the deployment. So when you are giving the ultimatum, are you giving the ultimatum for those in the North-East Region to also be withdrawn, those in the Northern Region to also be withdrawn?,” he asked.