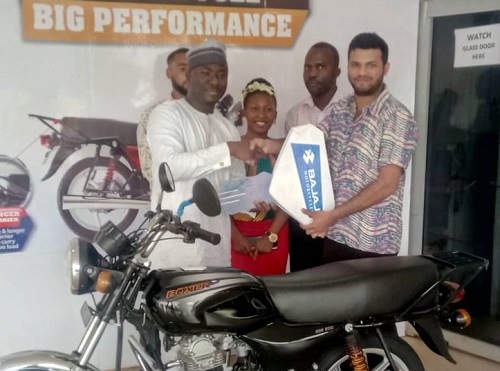 The management of SOMOCO Ghana Limited is supporting the annual Sheikh Sharubutu Ramadan Cup with a brand new motorcycle, which will be presented to the best player of this year’s tournament at the Wembley Sports Park, Kotobabi.

The fifth edition of the tournament was originally scheduled for last Saturday, but has been rescheduled to this Saturday due to the ban on noisemaking in the capital.

Making the presentation, the Head of Business of SOMOCO Ghana Limited, Girender Mohinani, said they have been impressed by the successful organisation of the Ramadan Cup over the years, hence their decision to offer their support this time.

He added that the objective of the competition, which is to honour the National Chief Imam and bring youth from Zongo communities together, is a noble one which they proudly want to associate with.

“We have enormous respect for the National Chief Imam, and since this competition is named in his honour, and it also seek to bring youth from the communities together, we considered it as worth supporting,” Mohinani stated.

Sixteen Zongo communities will participate in the fifth edition of the Sheikh Sharubutu Ramadan Cup.

Over 130,000 Africans Die From Food-Borne Diseases