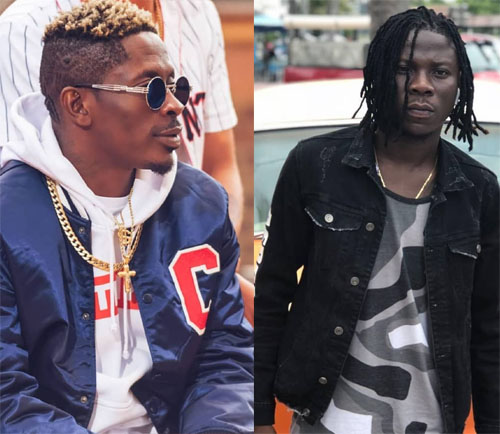 Shatta Wale has advised the media to stop comparing him to colleague musician, Stonebwoy.

Speaking in an interview on Daybreak Hitz, Shatta Wale, who is currently promoting his ‘Reign’ album, stated that he and Stonebwoy have different backgrounds in the music industry and are incomparable.

With years of bitter rivalry between them, he stressed that it sometimes hurts him to hear people try to compare him to Stonebwoy.

According to Shatta Wale, he has more experience in the music business than Stonebwoy and that puts the two of them in separate levels in the music industry.

“…When I hear people comparing Stonebwoy to me on the radio I laugh. When you interviewed me in Kumasi, it was in 2003, by then Stonebwoy was not out. So you don’t have to compare me to him. It’s a big foul…,” he said.

He mentioned that he is not in competition with any artiste.

The dancehall artiste added that he has positioned himself strategically to remain at the top in the industry.

“…I’m not competing with any artistes and no artiste can bypass me. People should stop comparing me to Stonebwoy. Now Stonebwoy feels that I’m his enemy…,” Shatta Wale stressed.

The self-acclaimed ‘dancehall king’ disclosed that he recently invited Stonebwoy for a discussion aimed at putting to rest any negative rift between them and begin to plan ahead for a collaboration.

“…Two days ago I texted him and told him that his new song (‘Top Skanka’) is a nice song. I told him to come let’s sit and talk and stop this negative energy vibe…,” he revealed.

The ‘Kakai’ hitmaker also hinted that that he has the biggest fan base in Ghana.