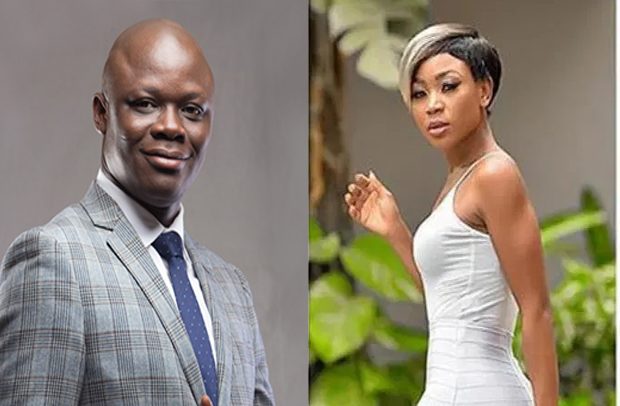 Samson Anyenini has asked Ghanaian celebrities and some members of the public who have been defending incarcerated socialite Akuapem Poloo to stop displaying their ignorance about the case.

“Stop spewing absolute ignorance without deeper thought or a scruple principle,” the lawyer and host of Joy FM’s current affairs analysis programme ‘Newsfile’ said on the show over the weekend.

Poloo, born Rosemond Brown, was Friday handed a 90 days jail sentence by the Accra Circuit Court presided over by Her Honour Christina Cann. The conviction was the result of a naked picture she posted with her son on Instagram while celebrating the boy’s seventh birthday. Her punishment is to serve as a disincentive to others due to the alarming rate of nudity in Ghana’s social media space.

Several Ghanaians including some top celebrities have described the sentence as harsh, with some taking to social media to express the displeasure.

“I think it’s a little harsh to separate a child from the mum just because of pictures taken … would want to plead with the law to pardon our sister. Folded hands #FreeAkuapemPoloo,” Sarkodie wrote  in a  tweet.

“Ghana is a stupid hypocritical country! There was a video of a minister of state in his PJs having lewd conversations with his girlfriend. Y’all jailed him? You hand a 90 day sentence to a lady for a nude shoot with her own son? Same son that came out of her veejay? Would it be ok if she’d been breastfeeding him? Whatever happened to community service or some probation? This is utter foolishness,” movie director Leila Djansi wrote.

But Mr. Anyenini in an editorial he titled, “Akuapem Poloo, how is 90 days harsh,” described most of the celebrities’ outbursts as coming from an uninformed point of view.

“Celebrities, properly called, have much influence, especially on the youth. It is expected that before you take on a cause, you will seek professional advice if it is not a matter for common social commentary. Today, I ask or repeat your questions, mostly uniformed, and educate you over your ‘#FreeAkuapemPoloo’ campaign.”

“She was arrested in July, appeared in court and pleaded not guilty and granted bail in November 2020. Why did she change her not guilty plea to a guilty plea on Thursday? Apparently, she changed her plea, obviously upon advice, after she and her lawyer had been, as required by law, served with the evidence the prosecution was going to use for the trial. Tell me if you were also given those documents to examine or what informs your loud protest that she should not have pleaded guilty? The evidence must have included her public admission and apology video – how was she going to defend that? Leave her lawyer alone,” he partly stated.

“What did you want the court or judge to do after she pleaded guilty? What exactly do you mean by it was too swift compared to other cases involving prominent people? Which cases are you talking about and who has pleaded guilty and their case has not ended because they are powerful, connected or rich? But when did it become the job of the courts to go arresting people you claim must also be facing prosecution?

Except for a capital offence, once an accused person pleads guilty, a judge is constitutionally legally bound to convict and pass a sentence. The court is the creation of law and the judge works with the law.”

“Why was she remanded into custody after conviction when she was already on bail? You really want the rules changed just for her and why? A suspect has been brought to court, she pleads guilty and is convicted to wait for sentencing, and you are preaching the convict should be allowed to go home and not kept in the custody of the state? What will you think and say if she doesn’t show up for conviction, does anything or runs? Is this how you want convicts to be treated? Stop spewing absolute ignorance without deeper thought or a scruple principle!

“How can you keep a single mother away from her child for two days? Okay, granted she, in fact, is responsible for the child 24/7; this will be the first time she will ever be away from the child for two days or even a month or more?  Do we have single mothers in custody, in prison, or let them go when they plead or are found guilty of an offence?

“The judge, acting within the law, had the power to hand her the maximum of three years for the first offence, then a maximum of GH¢ 60,000 or plus two years each for the second and third offences. That’s seven years altogether, but she handed her 90 days for each offence and even that she ordered the sentences to run concurrently – meaning she serves only 90 days and not the total of 270 days.

The court had the power, taking all circumstances into consideration, to opt for non-custodial sentence of fine plus a bond to be of good behaviour or a caution. It is the court that was seized with the facts, and it must have been aware of your uproar and shouts decrying her conduct and calling for action when she first published those pictures – what hypocrisy of a confused generation in dire need of principles, a sense of decency and a scruple of morality. May the child survive the potential effects of what he was put through by his mother.

If you must continue your campaign for freedom, now is the time because a judge has no such powers to free a convict. The President wields the prerogative power of mercy to grant a pardon or reduce her sentence. Those of you preaching a wiser sentence would have been to put her to some work and public advocacy, there is no such thing as sentence to community service in Ghana.

“The law provides deterrence which is not served by a fine in this case. Another judge may have handed her half or a quarter of the punishment allotted in this case to show even tougher love, which doesn’t kill. 90 days or more is the punishment for this in many countries. May the lesson be learned! But dear friends, by your new law, Cybersecurity Act 2020, A mere threat to circulate an indecent image for whatever reasons including blackmail or sextortion attract 10 to 25 years in jail. A judge has no discretion to give you less when you are caught by it. If you want only fines, get to work now with your MPs and not police or judges,” he concluded.

ER House Of Chiefs To Chase Out Nkwatiahene