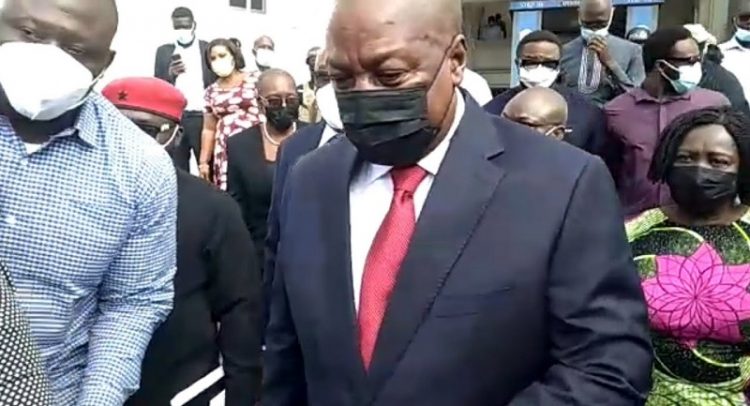 The Supreme Court, in a 9:0 decision, has dismissed a review application by John Dramani Mahama, praying the Court to reopen his case and have Jean A. Mensa, the Chairperson of the Electoral Commission, subpoenaed to testify.

The nine-member panel, presided over by Chief Justice Kwasi Anin Yeboah, held that the Petitioner’s application lacked merit in its entirety.

This is the third time the Petitioner’s review application had been thrown out.

The Court said its review jurisdiction should not be based on emotional reaction and that the success of the Petitioner’s case was dependent on his evidence.

The Court said Mr Mahama failed to demonstrate any exceptional circumstance that could have led to a miscarriage of justice adding that he had also not introduced any new evidence for the apex court to change its decision.

Moving the application for review, Mr Tsatsu Tsikata, Counsel for the Petitioner, who sounded prophetic, quoted the Book of Hosea 8:7 to support his case.

He argued that the ruling of the Court, on February 16, had some fundamental errors of law and same had occasioned a miscarriage of justice.

He was of the opinion that the Supreme Court failed to avert its mind on Section 72 of the Evidence Act, which granted the Petitioner the opportunity to subpoena Jean Mensa, the first respondent, but rather depended on Black’s Law Dictionary, the most widely used law dictionary in the United States.

Mr Tsikata further stressed the need to allow Mr Mahama to reopen his case so the EC Boss would testify and be accountable to the people of Ghana.

He said the Court, in deciding on his arguments on fair trial, should rule based on their conscience, fidelity and judicial oath.

He held that the February 16 ruling of the Court was in breach of Article 296 of the Constitution and was unreasonable.

Justine Amenuvor, Counsel for the EC, opposed the application for review, saying the petitioner had not met the grounds for it.

He argued that the grounds for review was misconceived and same held no bearing of ratio set out for review application.

He recounted that the Supreme Court, in the previous rulings, made it clear that review applications were not times for a party to argue his or her case again.

Akoto Ampaw, Counsel for the second respondent, President Nana Addo Dankwa Akufo-Addo, opposed the application for review saying the petitioner had not demonstrated that a fundamental error of law had occasioned the miscarriage of justice.

He said a look at the petitioner’s statement of case showed a deliberate omission of the word “evidence,” which was improper.

He said it was misconceived on the part of the Petitioner to suggest that the Supreme Court erred by allowing a substantive legislation to triumph over a subsidiary legislation.

‘’The position of the law by the petitioner had been persistently cited out of context,’’ he said, adding that no evidence had been led to sustain his (petitioner) right to fair hearing.
Mr Ampaw said in reference to a breach of Article 296 of the Constitution, the Petitioner also failed to demonstrate the grounds of allegation of unreasonableness.

‘’We submit that the application is devoid of merit, it deserves a summary dismissal and given the facts of the arguments, it is a rehash of arguments,’’ he said.

On February 16 the Supreme Court dismissed an application by the petitioner to have his case reopened after he had called his third and last witness.

According to the court it did not find any merit in the application and dismissed same.

Mr Mahama, through his lawyers, filed a review and a stay of proceedings, pending the determination of a review application.