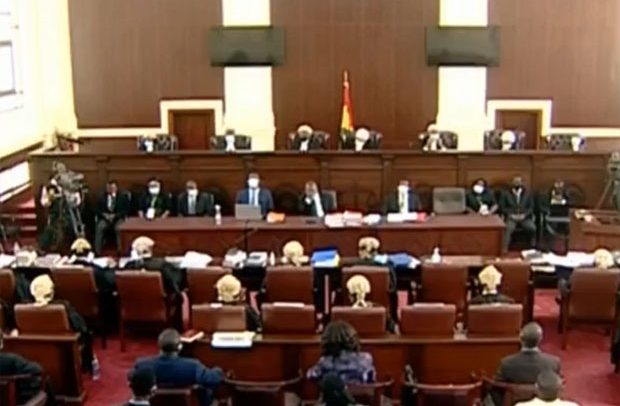 The Supreme Court has fixed Thursday, March 4, 2021, to deliver the final judgement on the 2020 Election Petition trial.

This follows the grant of leave to the petitioner’s lawyers to file their closing addresses by Tuesday, February 23.

The seven-member panel, on February 11, ordered lawyers in the petition to file their closing addresses by February 17.

The lawyers of the first and second respondents (the Electoral Commission and President Nana Addo Dankwa Akufo Addo), filed their respective addresses on February 11.

He explained to the Court that they had filed an application for review, of which they were optimistic would succeed, and same would advance their case.

Mr Tsikata argued that parties in the case would suffer no prejudice once they had elected not to adduce evidence and close their cases.

He said the application for review and stay of proceedings were evident before the Court and it had dismissed same.

He denied that the petitioner had arrogated to himself timelines to file his closing addresses.

Lawyers for the two respondents opposed the grant of leave to the petitioner to file his closing address.

Counsel for the Electoral Commission, Justine Amenuvor, said Rule 68 of CI 16 as amended by CI 99, states that no party had the right to stay away from proceedings.

He said the Petitioner was only telling the Court why he refused to comply with its orders.

Lead counsel for President Akufo-Addo, Akoto Ampaw, said the petitioner was not seeking magnanimity but rather asserting a right.

He, therefore, prayed the court to delete paragraphs 10, 13, 14 and 15 of his affidavit in support of his leave application that sought to assert the right of the Petitioner.

“If the Court grants leave, it would undermine the Court’s established authority. They should be made to file their addresses by end of today or tomorrow,’’ he said.

Mr Ampaw said the petitioner had elected to tell the Court that it would not be ideal for him to file his closing address.

The seven-member panel, after listening to all arguments, granted leave to the petitioner to file his closing address by Tuesday, February 23.

The Court said it would summon lawyers to appear before it if the need arose for them to explain any issues raised in their respective addresses.

Petitioner had gone to court challenging the validity of the declaration of President Nana Akufo-Addo as winner of the 2020 polls.
He further accused the EC of vote padding, an assertion the Commission has denied.
GNA

A Punctuation Mark Can Cost Your Marriage