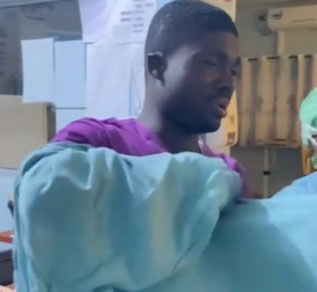 One of the suspected thieves

Korle-Bu Police, Accra, has confirmed the arrest of two men who posed as medical officers to steal thirteen pints of blood at the Surgical Theatre Recovery Ward of the hospital.

The suspects have been identified as Kwame Adu Twum and Wilfred Torshie, both former students of Accra Polytechnic, who did their National Service at the health facility.

A statement issued by the Public Relations Unit of Korle-Bu Teaching Hospital (KBTH) said its internal security mounted surveillance after receiving a tip-off, which led to the arrest of the two suspects on Saturday at about 2am.

“They were arrested at the surgical third floor when they attempted to steal several pints of blood that had been mobilised for various surgical procedures,” the statement added.
The statement urged staff of the hospital “to be vigilant when they see any suspicious activity going on in the hospital and to immediately alert the security to forestall the occurrence of any untoward incidents in the hospital.”

Police Report
Confirming the arrests, DSP Efia Tenge, the Accra Regional Police Public Relations Officer, said on May 22, at about 1:30am, the two suspects who were wearing doctor’s apparel visited the Surgical Theatre Ward and Surgical Ward 3 with an empty ice chest.

She said the suspects introduced themselves to the nurse on duty as doctors and requested to be allowed to store pints of blood in the blood fridge.

“The nurse gave them the key to the fridge without any further checks and instead of storing blood, the suspects made away with pints of blood,” DSP Tenge disclosed.

DSP Tenge said a CCTV camera captured the suspects, which led to their arrest by security personnel on duty, and later handed them over to the police.

She said investigations revealed that Adu Twum had gone back to school to do a top-up while Torshie is also working as a lab technician at a medical laboratory at Teshie, Accra.

ECOWAS Holds Workshop for Reconstitution of Council of the Wise

Atletico Madrid Are Champions of Spain