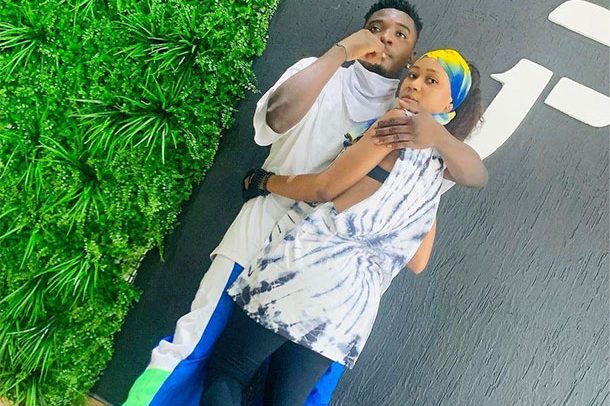 
Rapper AMG Armani has sent a caveat to Akuapem Poloo to pull down posts she made about him suggesting that they are in love and dating.

According to him, he has girlfriend and it is not Akuapem Poloo, as he shut down claims about him and Poloo being an item.

The controversial socialite on Saturday shared separate intimate posts suggesting she and the musician are deeply in love with each other. This was after they reportedly met at the gym.“I didn’t know you were this serious when you told me you love me @amgarmani thanks for making me fall in love again handsome 💯 ❤️ GYM WITH MY LOVE,” she wrote when she first shared a photo of herself with Armani after gym.

In second post of her and the rapper in a video she wrote, “ HE WAS LIKE I CANT SHOW HIM OFF @amgarmani IM PROUD TO LET THE WORLD KNOW WE ARE TOGETHER ❤️❤️💋 OUR FIRST OUTING TO THE GYM.”

“My heart beat for you honey,” she added in a third post.

All the posts received diverse comments with some persons advising her to keep her man off social media. A lot of bloggers also shared the news on their platforms.

But on Monday, Armani in a video response to Poloo said she should take down the posts because she lied about her relationship with him.

“Anyone who follows AMG Armani knows I am very calm, I am reserved. I don’t do things for clout. There is something going on that I think I need to address, I need to talk about because for the past two days some pictures and video have gone viral and people are saying I am in a relationship with Akuapem Poloo.

I mean she posted it herself saying she is in a relationship with AMG Armani and that is not true,” he said.

“Akuapem Poloo, you know there is nothing going on between us. We only met couple of days ago at the gym and you came to me that you are a fan, you want to take pictures and all that. So we took the pictures, made videos and the next minutes those pictures and videos are online, bloggers and everybody posting saying we are in a relationship which is not true.

“I mean you and I know that there is nothing going between us. I don’t know the reason behind what you are doing. I don’t know what you want to gain from that but it is really not cool. I think that if you are doing something you don’t think about yourself alone, you think about the next person because right now this is becoming a problem between me and my girlfriend.