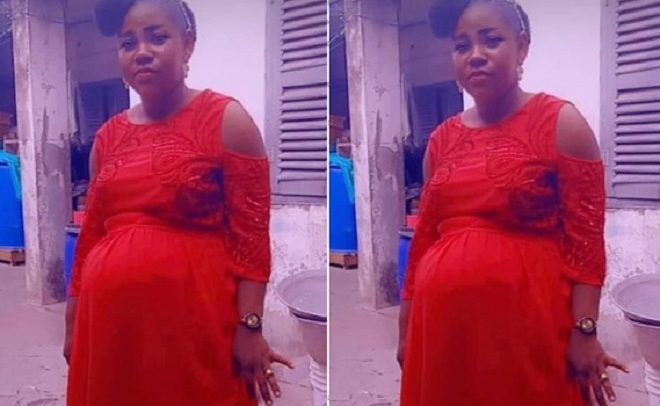 The medical doctor who conducted examination on Josephine Panyin Mensah at the Axim Government Hospital in the Western Region, yesterday told a Takoradi Circuit Court that there was no indication that she had delivered when she was found.

Josephine Mensah is the supposed heavily pregnant woman in Takoradi who allegedly went to hide and claimed she was kidnapped and her baby stolen in the process by her captors.

Her disappearance, which later turned out to have been staged, sparked heated debate in the country.

According to the 5th Prosecution Witness, Dr. Jerry James Abobrah, Medical Superintendent of the Axim Government Hospital, the various tests they conducted for the accused person did not show any traces of postpartum.

The Circuit Court ‘A’ in Takoradi, presided over by His Honour, Michael Ampadu, commenced the much-talked-about trial on January 6, 2022 during which Michael Simons and Agnes Essel, husband and mother of the accused person respectively, told the court that they saw Josephine Mensah was physically pregnant.

Giving his testimony yesterday, Dr. Abobrah made it clear that the various tests conducted, including that of the vagina, uterus and the abdomen among others, indicated that the accused was “a healthy, non-pregnant premenopausal woman.”

The doctor, led to give his evidence-in-chief by the prosecutor, Supt Emmanuel Basintele, indicated that the tests on the accused were conducted with assistance of about four midwives and all the tests proved that the 28- year-old woman had not given birth within six days that she claimed she went missing before resurfacing at Axim.

“Some physical evidences found on a woman who has given birth like the darkened black line on the stomach which is still visible after giving birth, were not found. Her breast was flabby and the nipples, not darkened as in the case of a woman who has just given birth,” he told the court.

The medical doctor told the court that when the accused was sent to the hospital as a patient on September 21, 2021, Josephine Mensah had indicated that she was pregnant for 11 months before her so-called kidnapping.

Dr. Abobrah said after Josephine narrated the ordeal she allegedly went through, he asked the accused for her antenatal care record book, which is given to every pregnant woman who attends hospital.

He said that the accused initially told him that her antenatal record book was at home in Takoradi, adding “later, she said the book was lost because when she was going for her routine walk before she was allegedly kidnaped, she had the book with her so that when labour sets in at any time she can go straight to the hospital,” the doctor testified.

He said the woman narrated that the unknown people who allegedly kidnaped her covered her mouth with cloth, making her unconscious and when she later regained consciousness, she saw herself tied with a rope and in the midst of some other 21 pregnant women in a thick forest who were being killed.

The doctor said the woman told him that one of the kidnappers then told her to push and something fell from her vagina.

“I asked her what was it and she said she saw a live female baby and the baby cried once. I asked how was the placenta cut and she said by herself with her fingers.

“I again asked of the whereabouts of the baby and she said she didn’t know where she was taken to,” the doctor told the court.

During cross-examination, Fiifi Buckman, counsel for the accused, asked the doctor if he heard the ‘brouhaha’ or the ‘confusion’ on whether the woman was pregnant or not on radio after she was found.

Doctor Abobrah answered he did not, and explained that he was busy on the issue and did not have time to listen to the radio.

“The police medical form was given to you on September 21, 2021 and it was with you three days after the brouhaha before writing your report,” the lawyer fired and the doctor answered in the affirmative.

Prior to the doctor’s testimony, two other witnesses, Michael Prah, the carpenter who initially saw the woman at Axim and one Ebenezer Nyame Ayeh, also of Axim gave their testimonies.

Josephine Mensah, whose alleged self-kidnapping sparked public outrage after sending the police on a wild goose chase, has been charged with publication of false news and deceit of public officer and pleaded not guilty.

According to the prosecution, the accused resides at Old John Sabbah Road in Takoradi, and on September 16, 2021, at about 4.05pm, Michael Simons of Columbia, Takoradi, who is the husband of the accused, informed the police that his wife who was 10 months pregnant and lived with her mother, Agnes Essel, left home for a health walk but could not return.

The prosecution said the mother of the accused also added that same day at about 3:30pm, an unknown caller called her on MTN number 0599601438 and she only heard the voice of accused crying that she had been kidnapped and taken to an unknown location.

In the course of investigations, the police discovered that the said number called from Agona Nkwanta in the Ahanta West District and was registered in the accused person’s own name. Police trailed the number there but did not find the accused.

The prosecutor continued that on September 21, 2021, at about 11:15am, while a massive search was in progress, police had Intel which indicated that accused had been found at Axim, the Nzema East Municipality of the region.

The police in Axim was informed and the accused was conveyed from the premises of the Jehovah Witnesses Kingdom Hall to Axim Government Hospital for treatment.

The prosecution told the court that the accused later narrated that she was pregnant and kidnapped during a walk on September 16, 2021, at about 4:30am, by unknown people who covered her mouth with cloth, making her unconscious.

She added that she met about 12 other unknown women kidnapped by her captors and they were all killed except her, and that she gave birth to a baby girl and afterwards fell unconscious for the second time and had no idea how she got to Axim.

The accused later indicated that she bought a pregnancy prosthetics, popularly called silicon belly, which she was wearing to make her look pregnant.

According to Josephine Panyin Mensah, who has told the police she is 27 years, she bought the silicon belly at the Takoradi Market Circle at GH¢30.00 but threw it into the bush while on the Takoradi-Agona Nkwanta trunk road when she was faking her kidnapping.

The accused person also admitted that the MTN number 0599601438 through which the supposed kidnappers spoke to the mother, Agnes Essel aka Aunty Aggie, was her own old SIM card which she later discarded.

These revelations were contained in the accused person’s own caution statement.

On September 21, 2021, the accused was discharged from the Axim Hospital after she was attended to by Clinical Psychologists.

The police then took the accused person to Effia-Nkwanta Regional Hospital in Sekondi where she was again examined by doctors who also concluded that accused did not give birth to any baby within the six days that she went missing and resurfaced.

The case was adjourned to January 20, 2022 for the cross-examination to continue.