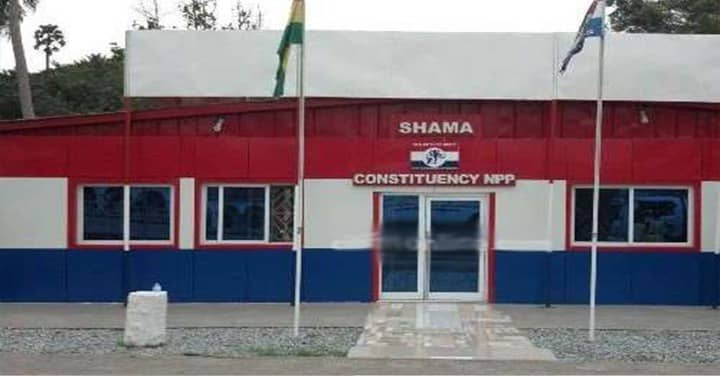 DGN Online has gathered that the Shama constituency office of the ruling New Patriotic Party (NPP) in the Western Region was broken into by some alleged criminals last Thursday and made away with almost all items that were at the office.

Some of the items stolen included desktop computers, printers, ceiling fans, a decoder and flat-screen television sets among others. The alleged thieves also ransacked all the drawers at the office.

The constituency’s NPP chairman, Richard Degraft who confirmed the story, noted that the thieves used the backdoor after breaking the burglar-proof that had been used to secure the door.

“They used the backdoor. We already have burglar-proof at that door but they destroyed it before having access to the place. When I got to my office, I realized the place has been ransacked. Now I am unable to stay at the office now because the place is not safe”, he asserted.

He said he had a call on Thursday morning from his colleagues that the party office has been broken in to and some items missing.

He indicated that the robbers broke all the inner doors in the office to search and see if they could find any valuable items to take.

He added that there was a Police Barrier at Inchaban where the NPP constituency office is situated, however, the authorities have relocated the barrier to Shama Kumasi also in the district and that might have made the thieves gather the vim to break into the office.

He noted that the Shama District Police Command has taken over the issue and that investigations had already begun, adding “None of the suspects have however been arrested”.

He said “There was a police barrier at where our office is located but the barrier has been relocated and I believe that was why the thieves were able to carry out their operation”.

“I have reported the issue to the police and investigations have begun. However, we have locked the office for the meantime”, Richard Degraft indicated.

For his part, the Constituency Secretary of the NPP, Emmanuel Mark Ackon said apart from the furniture, the thieves bolted with almost every property in the office.

“We are collaborating with the police to investigate the issue and we are hopeful that the thieves will be apprehended”, he stressed.

The office was constructed for the party by the former Member of Parliament (MP) for Shama, Ato Panford who was defeated by Erickson Abakah, a legal practitioner in the party’s 2020 parliamentary primaries and now an MP for the area.