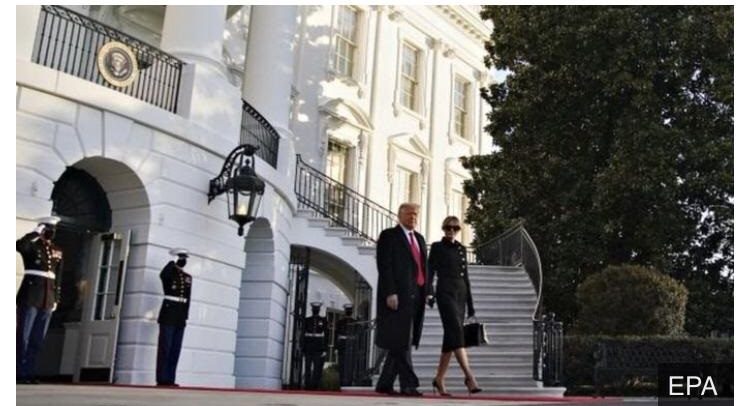 President Donald Trump has departed the White House for the final time with a vow.

In his last speech on Wednesday, January 20, 2021, the outgoing President vowed “we will beback in some form.”

Mr Trump delivered his final speech as president at Joint Base Andrews in Maryland. He flew to Maryland from the White House with First Lady Melania Trump.

Addressing his supporters, the Republican Leader noted that “a great honour to be your president”.

“I wish the new administration great luck and great success,” according to him.

Mr Trump is the first US President since 1869 to skip his successor’s inauguration.

Security has been heightened in Washington DC ahead of the inauguration of President-elect, Joe Biden and Vice President-Elect, Kamala Harris.

The US National Guard in Washington DC
Mr Biden and Madam Harris will be sworn into office later today.

Already, outgoing President, Donald Trump has left the White House for the final time. He is expected to miss the inauguration.

About 25,000 security personnel have reportedly been deployed for the inauguration to be held at the Capitol.

Mr Biden and Harris will be sworn into office around 5:00pm today.