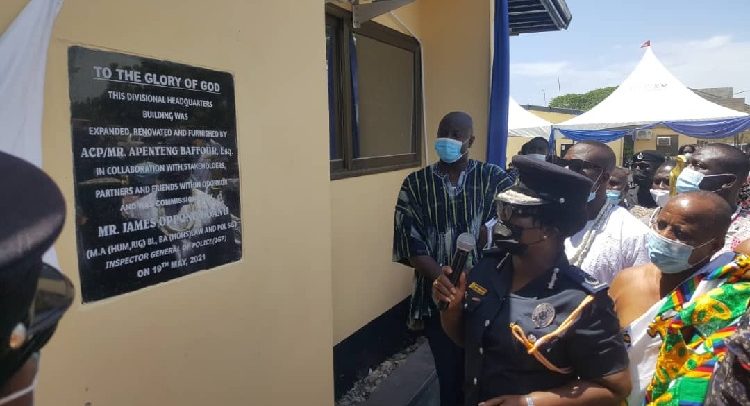 Two ultra-modern administrative blocks have been commissioned for the Odorkor Divisional Police Command And The Domestic Violence And Victim Support Unit.

The projects were sponsored by Zen Petroleum and other companies operating in the area.

At the official opening of the two edifices, the Director-General in charge of Welfare, COP Maame Yaa Tiwaa Addo Danquah, thanked the Divisional Police Commander, ACP Appenteng Baffour Nyamekye and the district command, Superintendent Douglas Kumah for taking the laudable initiative to engage stakeholders for support and completion of the two edifices.

She said before the commencement of the projects, the Divisional Police Command did not have a befitting office accommodation for personnel to effectively discharge their mandated duties.

“The office space was clumsy and did not allow privacy or any productive official assignment and coupled with this was lack of suitable office equipment to discharge effective administrative and operational assignments.”

She continued that effective policing on contemporary crime prevention strategies remains a collective responsibility of the Police and the general public.

“The police can only be effective when it receives the needed support and cooperation from the public,” she said.

The Director-General in Charge Of Welfare maintained that without credible information from the public, the police will be rendered ineffective, adding that it was imperative for the police to corporate with the public to fight crime.

The Odorkor Divisional commander ACP Baffour Nyamekye Appenteng in a statement said before the expansion of the divisional command block, the commander and investigators shared a common office and also shared washrooms with visitors.

He said the command solicited financial support from some corporate bodies and individuals in the jurisdiction of the command to complete the project.

He appealed to the police administration and individuals to support the Division with a vehicle to effectively respond to emergencies.

Mr Prince Awuley – Retail Director, ZEN Petroleum in an address said the Oppong-Boanuh Investigation Centre and the renovated Divisional Headquarters are a token of their commitment to giving back in ways that benefit the community and the people.

“Given that there are few pillars as crucial to the social fabric as the police service, it is important for us to contribute towards building a strong and well-equipped police service that works effectively for all.”

He said through “ZEN 2 Community” programs, we will continue to play our part in ensuring that pillars of our communities, such as the police service, are well equipped to work better for the benefit of society as a whole, as we conduct business safely, responsibly and with a passion to develop our motherland Ghana.