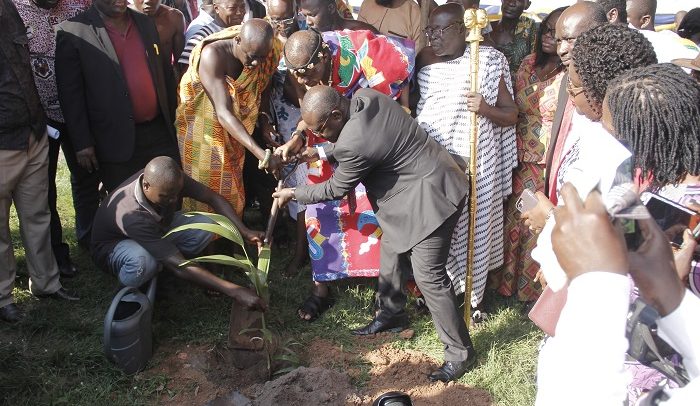 Prof. Ebenezer Oduro Owusu (right) being assisted by Daasebre Prof. Emeritus Oti Boateng and other dignitaries in turning the sod for the project

Vice Chancellor of the University of Ghana (UG), Legon, Prof. Ebenezer Oduro Owusu, has turned sod for the construction of a 4,660-bed Commonwealth Hall Annex.

Estimated at US$42 million, the Old Vandals/KPMM project is expected to deliver a fully-furnished 4,660-bed facility, a 1,000-seater auditorium and a shopping mall.

It would also have a 32 two-bedroom flat for lecturers and a sports centre.

Addressing guests and dignitaries at a brief ceremony on the forecourt of the hall in Legon, Prof. Oduro Owusu stated that the provision of housing for students has posed a great challenge to the university over the years, adding that the total housing stock at the university’s traditional halls provides a total of 7,000-bed spaces, which is just about 25 per cent of the entire students population.

He said that while management had considered various approaches to improving the situation and with efforts by the Student Representative Council (SRC) to reduce the accommodation deficit, the project comes as an important step towards the expansion of students’ accommodation on campus.

“Most importantly, it comes at a time that the Junior Common Room (JCR) of the Commonwealth Hall has petitioned the office of the President to address the accommodation crisis on campus. On this score, I am sure the junior members of Commonwealth Hall are happy to witness this event, and would accordingly revise their notes especially with respect to their expectations from management,” he added.

President of the Old Vandals Association (OVA), Isaac Nketiah Sarpong, expressed his gratitude to the university’s management and other stakeholders, hinting that the project would raise the status of the hall among its peers on campus.

Mr. Sarpong recounted that early this year, the OVA launched an appeal to raise funds to refurbish all the lavatories in the main hall and also to expand its water supply system.

Work on this, he assured, would start in the first quarter of next year.

The sod turning ceremony was held on Wednesday, November 6 at the Commonwealth Hall in Legon, Accra.