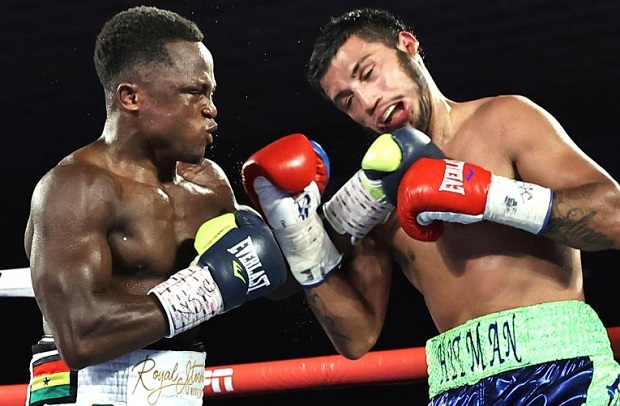 Ghanaian international boxer, Isaac Dogboe, has rebounded from his previous humiliating defeat, knocking out American boxer, Chris Avalo, in what appeared to be one of his best fights in years.

Dogboe knocked out Avalo in the eighth round on Tuesday night, July 21, 2020, during their Las Vegas bout.

He began the fight on an excellent note, dominating from round one through to round eight when he was declared winner.

But he brilliantly managed to beat Avalos with 35 seconds remaining in an eight-round featherweight bout inside the bubble at the MGM Grand in Las Vegas.

Speaking in an interview with sports television ESPN, monitored by DGN Online, the Ghanaian boxer observed how God has been part of his life for 14 months now.

He gave God the glory for his victory.

He noted “We’re still warming up. I felt great in there today.”

In the rematch, five months later, Navarrete beat him so badly in the 12th round.

Watch the fight below

Police Must Probe This